Jaccob Slavin is an American professional ice hockey player who plays in the National Hockey League (NHL). As of 2019, Jaccob Scott Slavin currently plays for the Carolina Hurricanes as their Defence. Jaccob Scott Slavin has played for other teams like United States National Team. The 120th overall pick of the 2012 NHL Draft, Slavin started his pro career with Hurricanes in 2015.

As of 2019, Jaccob Scott Slavin has an estimated net worth of over $5 million similar to that of Thomas Greiss. Jaccob has an average salary of $5,300,000 annually while Nino Niederreiter is among the list of highest earners of the Hurricanes team. He reportedly signed a seven-year contract worth $37.1 million with Carolina Hurricanes on July 12, 2017.

Slavin so far has made earnings of $7,501,639 from his entire NHL career. who earns an annual average salary of around

Jaccob Slavin is a married man. He tied the knot with his girlfriend Kylie Slavin in August 2015 in a lavish wedding ceremony in front of family and friends. Jaccob and Kylie dated for a couple of years before getting into a marital relationship in 2015.

The couple is blessed with a child born in 2018.

Charleston was a treat! Great food and some fun with @kyslavin and @twofloofydoodles!! Now time to get back to work @nhlcanes

Jaccob Slavin is living a happy married life with his wife since they seem happy as seen on their social sites posts and photos. Furthermore, there aren't any details regarding his past affairs on the media.

Besides, Jaccob is an animal lover and has kept two pet dogs.

The Famous NHL star is 6 feet 3 inch in height and weighs around 88 Kilograms.

Jaccob Scott Slavin was born on May 1, 1994, in Erie, Colorado, the United States to parents Robert Slavin and Wendi Slavin.

As per his nationality, he is American and belongs to the White ethnic group and his star sign is Taurus. He grew up along with his siblings, Justin, Josiah, Jeremiah, and Jordan.

Jaccob started his professional NHL career with the Carolina Hurricanes, selected in the 2012 NHL Entry Draft in the 120th overall pick.  Besides this, he also played for the Colorado College's team Colorado College Tigers. 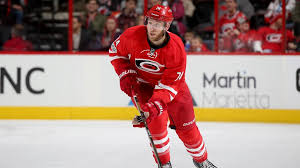 He made his NHL debut in the 2015-16 season and signed a three-year contract with them. Currently, he is playing for the Carolina Hurricanes alongside Warren Foegele and Trevor Van Riemsdyk.