Jeju Island native, South Korean golf player Im Sung-Jae was born on March 30, 1998. He seems to be the only child born to Im Ji-taek and his wife, Kim Mi. Im does not like to share his personal information with the media. After graduating from Cheonan High School, he enrolled at Korean National Sports University. Talking about his physical appearance, Im stands six feet tall and weighs 90 kgs.

Im Sung-Jae has an estimated net worth of more than $5 Million. He credits most of his net worth to his successful career with golf. Also, The golf player earns a good sum through their contract and brand endorsements. Although Due to COVID Pandemic, the number of tournaments was decreased, Jae ranked 13th in the highest-paid golfer's list earning close to $1.4 Million, which is slightly less than what Stewart Cink made.

Im is very much early in his career, and he shall be earning much more in the days to come. He has earned the most from the tournaments like The Honda Classic, Master Tournament.

Im Sung is an active social media user. He keeps posting photos of his along with his friends regularly. Following his posts, It seems like Im is living a happy single life. He must be focusing on his career. He likes to keep his personal life away from the media. 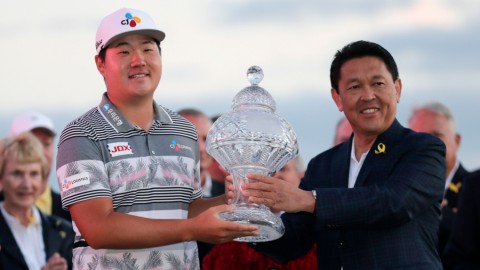 In an interview, The player mentioned that and He wanted to buy a house in the States so that his parents could move in and spend some quality time together. Jae likes to visit his friends regularly whenever he gets time.

Im played golf since his childhood. He even played for this University team. Twenty-two years old, Jae turned professional in 2015. After turning professional, He spent some of his initial years playing national leagues. Im gained fame only after being a joint runner-up in the 2017 Mynavi ABC Championship. At the end of 2017, He got a chance to play for Web.com and won the event at nineteen.

By the end of the season, Im was named Web.com Tour Player of the Year. In 2018, Jae qualified for Tour Championship as a Rookie player. He was named PGA Tour Rookie of the Year in consecutive seasons. In 2020, He won The Honda Classic and finished second at the Masters' Tournaments.