Ian Kennedy is a professional American baseball player who plays in the Major League Baseball(MLB) for the Kansas City Royals. Before this, Ian played as a pitcher for the Arizona Diamondbacks, San Diego Padres, and New York Yankees.

New York Yankees selected him in 2006 Major League Baseball draft in the first round. Does he acquire a net worth of around $50 million as of 2019? Besides his net worth, there are some interesting facts about his married life, wife, and children.

Ian Kennedy has a net worth of around $50 million; His annual salary and career earnings

Ian Kennedy is listed in the list of the highest-paid MLB players of recent time as his yearly salary is impressive just like his net worth. It is common for a player having an incredible salary to have such a massive net worth of more than $50 million as of 2019.

As we are discussing his annual salary, he is found to be receiving a salary of around $16,000,000 in this season. He received the same salary in his previous season. His career earnings rise in a fast way as he is now among the experienced players.

You will be amazed after knowing about his MLB contracts. Kennedy is currently playing under three years $49 million contracts signed on November 4, 2017. Before this, he signed a $70 million deal with the Royals for five years.

As most of the professional players keep their personal life hidden from the public, but Ian Kennedy is not among such player. He frequently shares about his married life and wife in media and also in his social media accounts.

Kennedy got married to his girlfriend  Allison Jaskowiak in  October 2007, in a lavish wedding ceremony held outside of St. Louis. 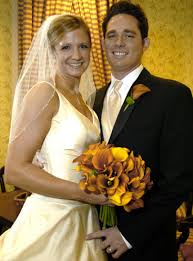 Most of his teammates missed his wedding because the team is in the playoff series against Cleveland Indians. He remembered about his wedding saying "I was thinking, what's more nerve-racking, pitching in the big leagues for the first time or getting married? It's a different emotion. I don't cry too much, but it was emotional." 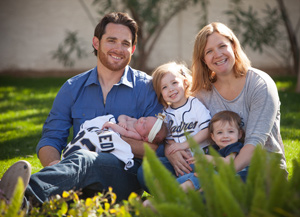 Ian with his wife and children SOURCE: refreshedmag.com

Kennedy and his wife Allison are blessed with five children which include four daughters and a son. The names of his children are Renee Kennedy, Evelyn Kennedy, Nora Kennedy, Lydia Kennedy, and his son's name is yet not available in media.

Ian and his wife share a lot of happy moments together, and they are still enjoying their married life. They don't seem to have a difference in their marital life, which suggests that their relationship is undoubtedly going to last long.  In addition to this, Ian is loyal to his wife, and he is not involved in extramarital affairs so far.

Who is Ian Kennedy? His Bio, Parents, Childhood, and Early Life

Ian Kennedy is a professional American baseball player who plays in the Major League Baseball(MLB) for the Kansas City Royals. Before this, Ian played as a pitcher for the Arizona Diamondbacks, San Diego Padres, and New York Yankees.

New York Yankees selected him in 2006 Major League Baseball draft in the first round. Kennedy made his MLB debut in 2007. He was traded yo Diamondbacks in 2009 in a three-way deal, where Max Scherzer was traded to Detroit from Arizona alongside him. If you want to know about other MLB players, just visit the site Playerswiki.com.