Previously, he has played for Melbourne Storm, Queensland, Australia, Indigenous All Stars and Prime Minister’s XIII. Inglis earns about $1 million from salary and some more amount from his endorsement deals. He was married but divorced his wife and is currently dating his girlfriend.

Greg Inglis was born on January 15, 1987, in Kempsey, New South Wales, Australia as Gregory Paul Inglis. He was born to his father Wade and mother, Monica Inglis who belong to Indigenous Australian (Dunghutti) heritage.

Inglis lost his six-year step-sibling, Tamieka (Sudden Infant Death Syndrome) in 2005 and after a couple of months, his sister died. He lost his Uncle Stephen Blair in an accident. Since his early age, he started playing for “Bowraville Tigers” in a rugby league.

While in a Macksville, he spent his childhood with his close friend and late Australian Test and One Day International cricketer, Phillip Hughes.

Greg Inglis spent $50,000 to help address social inequities form his own pocket between 2012-2014.  He is one of the highest players in NRL. He receives around $900k per season from his current club.

Inglis also has endorsements deals with several product companies. In  2014, he had a deal with Aboriginal Medical Service paying him $90,000. Previously in 2010, he had four deals with different companies that would make him the earnings of about $200, 000.

At the age of 15, Greg Inglis signed his first professional contract with “Canberra Raiders”. He later started playing with Newcastle’s Hunter Sports High when he was 16. The same year, he also represented senior football team of Wavell State High School, Norths Devils and, Australian Schoolboys team.

At the age of 18, Inglis's first match in NRL came with Melbourne Strom against Parramatta Eels replacing winger, Jake Webster. In the round 13 against Sydney Roosters, he suffered a back injury which kept him out for two months. He then extended his deal with the club for four more seasons until 2010 with the worth $2 million becoming the highest paid teenagers in rugby league.

Greg Inglis completed his 2006 NRL Season with 18 tries and 2 goals which earned him selection into Australian team for the 2006 Tri-Nations series. He was not involved in the 2007 Anzac Test because of his knee injury during the match against "Newcastle Knights".

Greg Inglis then received an offer from a different clubs like Toulon but he signed with South Sydney Rabbitohs on November 12, 2010, for the three NRL season (2011-2013) with the transfer fee of $1.8 million. 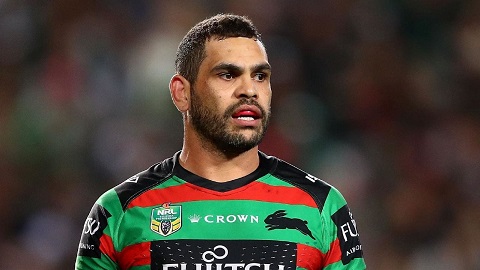 He later announced that he was hours away from singing with Essendon. In 2014, he held the Captain position after John Sutton was ruled out with an injury.  IN 2015, he was appointed as the captain of the club.

Greg Inglis made his international debut with the Queensland in 2006 where he made 72 points from 30 games and18 tries. He then represented his Australian national rugby league team in 2006 where he earned 124 points from 39 games with 31 tries. He then played Indigenous All Stars for four years from 2012-2016. Moreover, he also played 1 game for "Prime Minister’s XII".

Greg Inglis's star sign is Capricorn. He got married to his long-term girlfriend, Sally Robinson on December 5, 2010, at a lavish ceremony on the Sunshine Coast.

They exchanged their vows at the Twin Waters resort at Maroochydore and the ceremony attended by stars like Johnathan Thurston, Billy Slater, Sam Thaiday, and Cameron Smith.

The duo first met when they were teenagers at Wavell High. They welcomed their first child son, Nate Alexander in 2014. The duo extended their family with a baby girl, Quinnsy Bella who was born in October 2016.

Happy bday my little champion.. Today you turn 4.. In such a short time you have made me so proud.. I love you my little man.. #happybdaynate #natealexander

Inglis separated from his wife of 8 years in 2018.

He has a son named, Riley from his previous relationship with his ex-wife.  He has not revealed anything about his former wife. Moreover, he was even nominated for the Philips Sports Dad of the Year.