Gleyber Torres is a Venezuelan professional baseball shortstop who is currently signed to the  New York Yankees of Major League Baseball (MLB). He was signed by the Chicago Cubs in 2013  as an international free agent. On 22nd April 2018, he made his MLB debut.

Caracas, Venezuela native, Gleyber David Torres Castro was born on 13th December 1996, under the star sign Sagittarius. Born onto a middle-class family, Eusebio Torres, and Ibelise Castro. His father gave him the name Torres after it because of its uniqueness. The twenty-four years old holds Venezuelan nationality.

How Much Is Gleyber Torres' Net Worth In 2021? Salary & Contract

Gleybers Torres' salary for the 2021 season is reported $4 million from the New York Yankees.

As of 2021, Gleyber Torres' net worth is approximately $5 million.

Gleyber Torres is a married man. He tied the knot with Elizabeth, whom he met in his hometown of Caracas in 2014. After dating for a couple of years, the pair exchanged vows in 1st April 2017.

Torres has shared his beautiful wedding pictures on his IG. 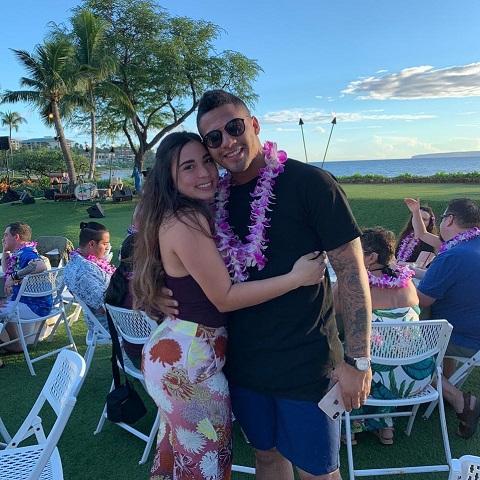 A supportive wife, Elizabeth often attends Yankees games all decked out in Yankees gear too.

In September 2021,  Torres and his wife Elizabeth Rodríguez announced on the Yankee Stadium field the arrival of a baby to the family Torres.

Torres relocated to Maracay to attend an academy that had contacts with MLB scouts. He was sought out by the Chicago Cubs and signed a contract with the team.

In 2013, Torres signed with the Chicago Cubs as an international free agent.

The following year, he made his professional debut with the Arizona Cubs of the Rookie-level Arizona League. Later, he was promoted to the Boise Hawks of the Class A-Short Season Northwest League.

He started 2015 with the South Bend Cubs of the Class A Midwest League. In September 2014, he was promoted to the Myrtle Beach Pelicans of the Class A-Advanced Carolina League.

At Yankees, he started with the Tampa Yankees of the Class A-Advanced Florida State League.

After that season, he was assigned to the Scottsdale Scorpions of the Arizona Fall League (AFL). He was honored as the AFL Most Valuable Player after batting .403 in 76 at-bats with a .513 on-base percentage and a 1.158 OPS.

In 2017, Torres started with the Trenton Thunder of the Class AA Eastern League and was later joined the Scranton/Wilkes-Barre RailRiders of the Class AAA International League. He concluded the season batting .287/.383/.480 with 7 home runs and 34 RBI, playing for the two teams.

Following the season, Yankee added Torres to their 40-man roster after the season.
On 22nd April 2018, Torres made his MLB debut against the Toronto Blue Jays, as the second-baseman going 0 for 4. He recorded his first MLB hit the next day, against the Minnesota Twins.

That season, he played most of his game at second base, despite playing primarily at shortstop during his minor-league career.

In 2019, Torres signed a 1-year contract with the New York Yankees. On 4th April 2019, he became the fourth-youngest Yankee with four hits and three extra-base hits in a game since Joe DiMaggio did it in 1936.

On 13th October 2019, Torres was named the youngest second baseman in MLB history, and the third-youngest overall to record at least four RBIs in a game, and the youngest ever for at least five RBIs.