Ellington, Connecticut native, Frank Mozzicato was born on 19th June 2003, under the star sign Gemini. The eighteen years old holds an American nationality and is of white ethnic background.

How Much Is Frank Mazzicato's Net Worth In 2022? Signing Bonus?

With a hefty signing bonus, Mazzicato is a millionaire at his teen. His net worth is approximately $3 million.

Since being drafted by Royal Kansas in the 2021 MLB Draft, Mozzicato has earned huge fame. Along with that, he now has become more concerned to keep his personal stuff low-key. Seems like the pitcher wants a spotlight only on his baseball career rather than anything else.

Frank Mozzicato is pretty famous on Instagram with 10.2k followers. Nevertheless, we can not find any lovey-Dobey post there. The baseball pitcher is believed to be single.

Frank Mozzicato enrolled at East Catholic High School in Manchester, Connecticut where he pitched for the school's baseball team. As a senior, his draft stock rose significantly after he threw four consecutive no-hitters.

He concluded his high school career with 492/3 scoreless innings, with a stretch in which he threw four consecutive no-hitters garnering national attention. That season, he helped the team to a Connecticut Class M State Championship, in which he struck out 17 and only allowed one hit.

For the collegiate career, Mozzicato joined the University of Connecticut with a college baseball scholarship with the Connecticut Huskies baseball team.

In the 2021 MLB Draft, Frank was picked in the first round (7th overall) by the Kansas City Royals, becoming the highest-drafted Connecticut high schooler since Bobby Valentine went 5th in 1968. 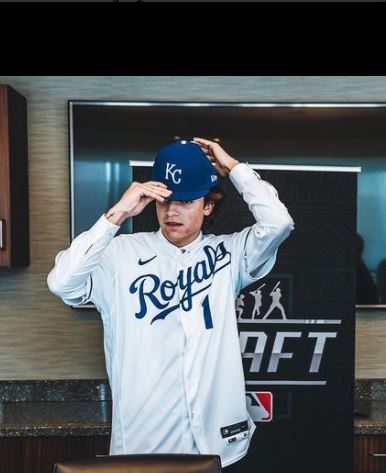 But before his senior season started this spring, no one knew his name.

“Everybody was like 'you're a lefty, you’ve got to pitch,' I was like alright,” said Mozzicato in an interview at his home the day before the 2021 MLB draft. “8, 9-year-old kid not knowing, you just go where the coach tells you to play, Frank said.