Fernando Tatis Jr. is a well-known Dominican professional baseball player. He is currently playing in Major League Baseball for the San Diego Padres as a shortstop and outfielder. Fernando won the Silver Slugger Award in 2020 and was named at the All-Star in 2021.

Fernando Tatis Jr has an estimated net worth of more than $50 Million. He has earned most of his net worth through his contract and salary with San Diego Padres. In early 2021, Fernando signed a 14-year, $340 million contract extension, and this is the longest contract signed to date in MLB history. Also, The third-richest in MLB history, behind deals signed by Mike Trout and Mookie Betts. 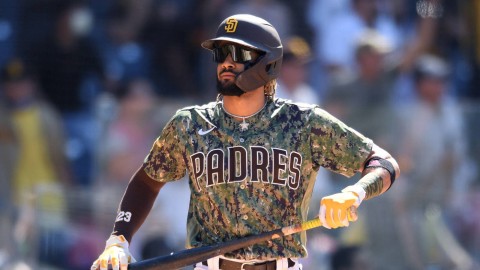 Who is Fernando Tatis Jr Dating? Know About His Relationship Status and Girlfriend

Fernando is an active social media user. He shares most of his events on his social media. Following his timeline, we can confirm that The Dominican player is single as of late 2021. His timeline is filled with photos of his games, training and family. Tatis love to spend his free along with nature and keeps going trekking. Fernando is very close to his family.

Fernando started playing baseball and his father in their home and signed as a free agent with Chicago White Sox in 2015. Fernando got traded to Padres in early 2016 and played with the Arizona League Padres. The following season, He played in 117 games for the Fort Wayne TinCaps Class A Midwest League. In 2019, Tatis was named for the Major League debut and hit his first major league home run in April 2019.

Fernando finished the season hitting .317/.379/.590 with 22 home runs, 61 runs, and 106 hits over 84 games. In 2020, The player had the highest average exit velocity (95.9 MPH) and earned the Silver Slugger Award, making it into the All-MLB First Team. He finished in fourth place for the National League MVP Award for the season.

In early 2021, Fernando signed a 14-year, $340 million contract extension with the Padres. In April, He sustained an injury but returned shortly in the game and hit two grand slams in one inning. Tatis Jr won his second consecutive Silver Slugger Award in 2021 and finished the season as the NL home run leader.