With the recent conclusion of the 2022 FIFA World Cup, football fans keep a close eye on the prospects of the sport. And as such, the Brazilian forward Endrick Felipe currently receives global attention. Despite being a minor, Felipe signed the biggest deal of his life with Real Madrid. And so, the world keeps the young Endrick in the focal point of the spotlight.

Currently, the young talent, Felipe, is sixteen years old. And as such, Endrick plays in the youth division. Even in his youth career, the talented Brazilian footballer piqued the interest of one of the biggest football clubs in the world. Despite being so young, the Brazilian striker holds millions of followers on his social media.

Many great soccer players have troubled childhood, which is the case for Endrick Felipe. There was a time when Felipe stayed hungry, but now, Endrick doesn't have to experience that again. And with Felipe signing the football giant Real Madrid, his fortune is only growing. Endrick Felipe and his father took a picture together. SOURCE: [email protected]

Born in a low-income household, Endrick's football journey began at the age of four. Even as a child, Felipe was very talented in soccer. And when his dad posted a video of the young footballer's goal, many Brazilian clubs wanted the sign the young prodigy under their banners.

When his father, Douglas Sousa, published the video of Endrick's ability, it earned him a spot at Palmeiras FC youth division. During this, Douglas was unemployed, and his family had financial troubles. Felipe gained an opportunity to grow, and the Brazilian club hired his father as a cleaner.

The only reason Endrick Felipe isn't in Spain playing for the soccer giant Real Madrid is his age. Felipe is only sixteen years old and is held back by the laws. And in 2024, Felipe will be of legal age and can move abroad for his career.

Palmeiras President Leila Pereira claimed the deal between Real Madrid and them was the biggest deal in Brazilian football history. Although the transfer fee amount stays hidden, sources claim it to be more than 30 million euros. Similarly, Madrid would also be paying another 25 million euros for the transfer.

Endrick found this great opportunity after taking his club to the Copa Sau Paulo de Futebol Junior finals and winning the tournament. After winning the said tournament, Felipe found international fame and came under many major European clubs' radars.

By October 2022, Endrick began his senior career under Palmeiras FC. Subsequently, Felipe became the youngest player to appear for Palmeiras. And in the same month, the sixteen-year-old Brazilian footballer scored his first two goals. 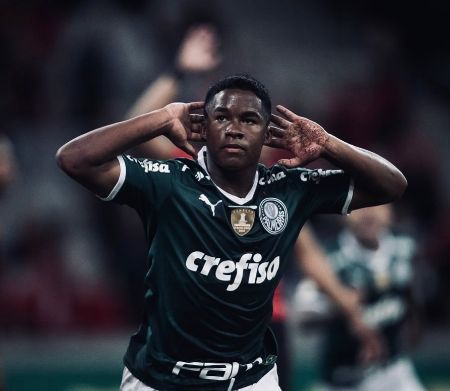 And now, Endrick holds the title of the second youngest goal scorer in Brazil's first division. For now, the Brazilian teen footballer appeared in seven matches and scored three goals in the said division.

Endrick dominated in his Youth Career!

At the start of his early career, Endrick Felipe almost became a player under Sao Paulo FC. But later changing his mind, Endrick signed under Palmeiras FC when he was eleven. And in five years under their banner, Felipe dominated the matches he played. 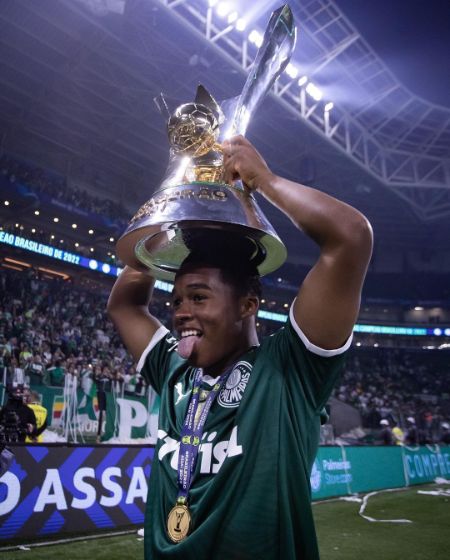 Winning the Copa Sao Paulo de Futebol Junior, Endrick netted seven goals in seven matches. And following the victory, Felipe was named the Player of the Tournament. Likewise, his name became a household name after he played 170 games and over 160 goals he netted. Along with his significant club achievements, Felipe recently joined the under-17 Brazilian national team.

The Brazilan Wonder Boy, Endrick Felipe, is expected to own Millions as his net worth!

Real Madrid confirmed the news of Endrick Felipe joining their club in December 2022. And, much about the deal's details remain hidden in the shadows. But, given the growth of his career, Endrick's transfer fee is estimated to be in the millions. And as his continues growth, Felipe's estimated net worth also has increased by leaps and bounds.

The Brazilian wonder boy currently owns approximately $2 million as his assets. However, once he turns eighteen and joins Real Madrid, Endrick's net worth will skyrocket. Similarly, Felipe rarely shares his wealth on his Instagram despite fame and fortune. And speaking of Instagram, the talented footballer accumulated multi-million followers.