Not much was seen till 11th minutes of the game as both teams were giving their best.

11 minutes into the game Egypt have their first shot of the afternoon after some on-field mess,  the ball falls to Trezeguet but delivered a poor shot on target.

16 minutes into the game Egypt won a free kick from a good position but Uruguayan defender Godin cleared it properly.

Till then pharaohs were seen fine without M. Salah whereas South Americans were seen having a hard time on the field against Egyptians. 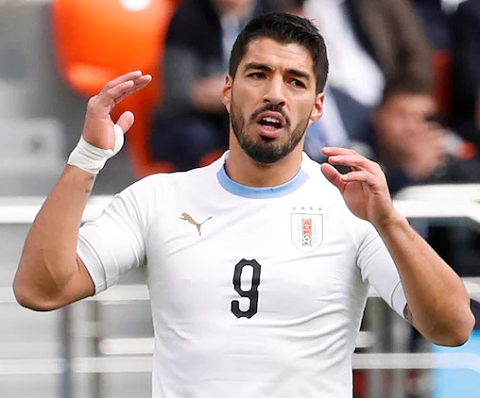 CAPTION: Uruguay missed a huge breaking chance, 24 minutes into the game
So Close but so far for Luis Suarez

Half an hour into the first half, nothing significant has developed from both sides.

31 minutes into the match, Suarez takes another free-kick but it couldn't cross the bars.

38 minutes into the game Godin stride forward from defense, and carrying the ball to attacking third before and passed the ball to De Arrascaeta who killed the shot with a dreadful touch.

Both teams shared a goalless draw by the end of the first half.

World Football pundits were disappointed at two of the greatest players from the Uruguayan side Suarez and Cavani not being able to breach Egyptian defense. But Egyptians have played a compact game as they haven't left any space between Keeper and first defense vacant for Uruguayan strikers to breach and send a ball into Egyptian's net.

47 minutes, Suarez nearly netted a goal as it passed the Egyptian defense for the first time in the game after Cavani sent the ball to Suarez's way. 50 minutes into the game Uruguay has 56% of ball position in the game.

The first Substitution for Egyptian side came in after 50 minutes of the game. Tarek Hamed was sent off after the frequent on-field accident and was replaced by Jersey no. 5 player Sam Morsy.

56 min: Ambitious effort from Trezeguet here as the ball drops to him at least 25 yards from goal. He takes a touch and then tries to get a quick shot away, but he drags it a long way off target.

After Elneny attempted a shot that goes over the crossbar, Suarez tries to net one in but Cavani's pass which was shot with precision from Suarez was flicked by Egyptian keeper.

Uruguay got a free kick in 86th minutes, and Vecino made his way to the tunnel, Cavani's free-kick hit the bar and Uruguay missed another opportunity to score.

Uruguay scored its deciding goal on the 88th minutes as Jose Gimenes sends one home in 88th minutes into the game with a beautiful header on Sanchez's pass.

Second Half Between Uruguay-Egypt's football battle looked like going towards a goalless draw but it all changed in the 89th minutes.

Hegazi was given a yellow card, after a foul against Suarez seconds before the final whistle. Uruguay won three points by wrapping the game with the last moment goal.