Adolis Garcia is a well-known Cuban professional baseball player. He has been playing in the professional league for more than five years. Adolis plays as an outfielder for his team. Garica is currently playing in Major League Baseball for the Texas Rangers. Adolis also played in the Nippon Professional Baseball for Yomiuri Giants in 2016.

Adolis Garcia was born Jose Adolis Garcia Arrieta on March 2, 1993, in Ciegod e Avila, Cuba. Adolis did not come from a reputed family, so there is not much information about his early life and parents. Garcia has an elder brother named Adonis García Arrieta, who is also a professional baseball third baseman. Adolis stands six feet and one inch tall and weighs 82 kg.

Adolis started playing baseball from a very early age along with his elder brother. Before starting his professional career, Garcia played baseball for his High School team and ended his High School career as one of the best players. He initially played in the Cuban National Series for the Ciego de Avila. In 2016, The Cuban player signed with the Yomiuri Giants in the Nippon Professional Baseball League.

In 2016, Garcia defected from Cuba and signed with the St. Louis Cardinals in February 2017, receiving a non-roster invitation to spring training. He finished the season playing for Springfield Cardinals and Memphis Redbirds at the Class AAA Pacific Coast League with a .290 batting average with 15 home runs and 65 runs batted between both clubs.

Yes, You read that right. Adolis is the proud father of a son. Garcia is married to his longtime girlfriend, Yasmarya. The love birds had a private wedding ceremony where they invited only a few family members and some close friends. Shortly after the wedding, Adilos and Yasmarys were blessed with a son, Chris Jason, in June 2017. 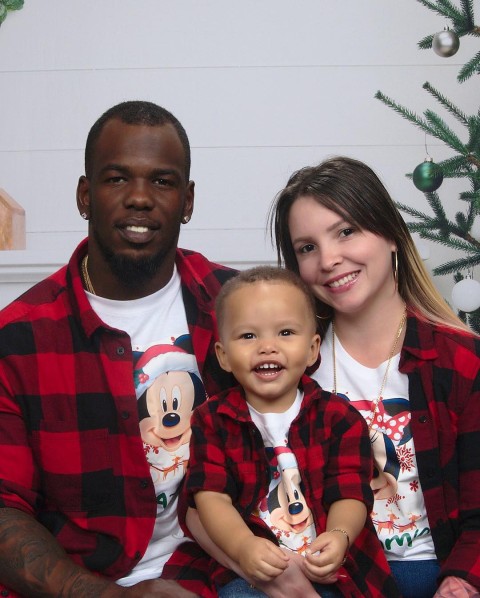 Adolis along with his wife and their son SOURCE: [email protected]

The family of three is living a happy married life. It's been more than five years of their marriage, and there have been no rumors of the couple having ups and downs in their married life. Both of them are active social media users and keeps hearing photos regularly.

Know About Net Worth, and Salary