Douglas Robert Gilmour is a Canadian former professional ice hockey player and current President of Hockey Operations for the Kingston Frontenacs of the Ontario Hockey League (OHL) and through a heralded career of twenty NHL seasons, Gilmour proved to be a determined and productive forward worthy of induction into the Hockey Hall of Fame.

Doug Gilmour was born June 25, 1963, in Kingston, Ontario and he is the younger son of Don and Dolly Gilmour and he has an elder brother, David. David was a professional hockey player drafted by the Vancouver Canucks but never played in the National Hockey League (NHL), and a correctional officer and also coached youth baseball and hockey teams in the city.

Doug always looked up to his brother but due to his small size, he was often left out from several teams throughout his minor hockey career. Gilmour began his season in Junior B with his hometown Kingston Voyageurs when he was just 16 years old.

Often lacking game time, Gilmour moved to a spot with the Junior A Belleville Bulls, where he began as a defenceman but shifted to left wing during the playoffs due to injuries.

Income and Net Worth of Gilmour

Doug Gilmour is a Canadian hockey general manager and former professional hockey player who has a net worth of $13 million.

Gilmour, who was playing the option year of his contract at a salary of US$450,000 was unable to reach a deal with the team on an extension. The dispute went to arbitration where the Flames offered a raise to $550,000 while he asked for $1.2 million and was expecting a settlement worth around $800,000. The arbitrator's decision, made in December 1991, amounted to $750,000 per season for two years but left Gilmour angry and bitter.

Despite all, during his career from 1989 to 2012, playing for various NFL teams, he has estimated the income of over $34 million.

Career and Achievements of Gilmour

Doug joined Cornwall Royals of the OHL, in 1980 where he was a solid defensive forward who could also score, although his size was considered a major stumbling block in the eyes of most NHL scouts. He scored 46 goals and 119 points in 1981-82 season.

He returned to the Blues junior hockey for the 1982-83 season and set the OHL on fire with 70 goals and 177 points, capturing the Eddie Powers Trophy as the OHL's leading scorer. He set a record with a 55 consecutive games scoring streak and was named the league's most valuable player.

In 1986-87, season Gilmour finished the regular schedule with a career-high 42 goals and 105 points and was selected to represent Team Canada at the 1987 Canada Cup. He scored two important goals in the series against the Soviet Union and was instrumental in Canada's victory at the tournament.

Gilmour was traded to the Calgary Flames at the beginning of the 1988-89 campaign where he continued his form in the playoffs, adding 22 points in 22 games as the Flames won the Stanley Cup in 1989. He was traded to the Toronto Maple Leafs in a blockbuster deal involving 10 players; the largest trade in league history

Gilmour played his best hockey with the Leafs setting a franchise record with 127 points in his first full season. Gilmour placed second to Mario Lemieux in the race for the Hart Trophy as the league's most valuable player but won the Selke Trophy as the top defensive forward.

In the 1996-97 season, Gilmour was sent to the New Jersey Devils and spent one full season and was signed as a free agent by the Chicago Blackhawks in the summer of 1998. In the spring of 2000, he was traded to the Buffalo Sabres, and again signed on as a free agent with the Montreal Canadiens in October 2001 and went on to play two seasons with the Habs.

Gilmour was dealt back to Toronto at the trading deadline in 2003. He officially announced his retirement on September 8, 2003, after Toronto Maple Leaf General Manager John Ferguson Jr. declined to re-sign him.

Over the course of his distinguished playing career, Gilmour registered 1414 points on the strength of 450 goals and 964 assists in 1,474 regular season games. He added 188 points (60 goals and 128 assists) in 182 playoff games. In 2011, Doug Gilmour was selected for Induction to the Hockey Hall of Fame with NHL greats like Phil Esposito and Brian Leetch.

Personal Life of the Hockey Hall of Famer

Now the general manager of the Kingston Frontenacs of the Ontario Hockey League. The 55 years old NHL, Hall of Famer legend has had quite a controversial personal life. Gilmour has been married three times and has four children.

His daughter Maddison Gilmour from his first marriage to Robyne Gilmour is married to a hockey player Evan McGrath.

Gilmour raised eyebrows when he traded his son Jake from his second wife Amy Gilmour to the Niagara IceDogs before he had the chance to play a single game for his dad's team. He also has a second son from Amy, Tyson Gilmour. 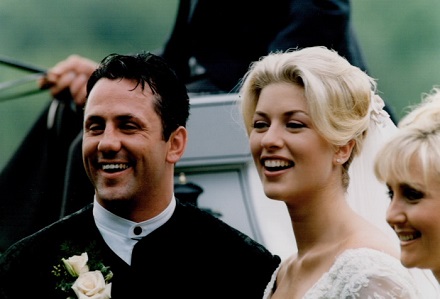 After he divorced his second wife, Doug married for the third time with Sonja Gilmour and share a daughter Victoria.