Debby Belichick is an American businesswoman widely recognized in the media as the ex-wife of the head coach of the New England Patriots of the NFL, Bill Belichick. The college sweetheart exchanged the vows in 1977 and welcomed three children together. However, their marriage turned sour, and they separated after twenty-nine years in 2006.

What was the reason behind Debby and Bill Belichick's divorce? Did Debby re-married? What is she doing now?

Nashville, Tennessee native Debby Clarke was born in 1955. There is not much information about her parents and siblings.

She did her high school at Annapolis High School. Further, she enrolled at Wesleyan University.

Debby has always been fascinated with design. She began her interior design firm and a couple of her friends, called Art of Tile & Stone.

The firm specializes in everything from interior decoration to installing new tiles and stones according to their customer’s specifications or in aesthetically appealing arrangements and blends.

Debby Clarke And Bill Belichick Were Married For Twenty-Nine Years: Know the Reason Behind Their Divorce

Bobby Clarke and Bill Belichick met while studying at Wesleyan University, where Bill was a member of the lacrosse and football team. Soon the pair started dating, and shortly after graduation, they tied the knot in 1977. 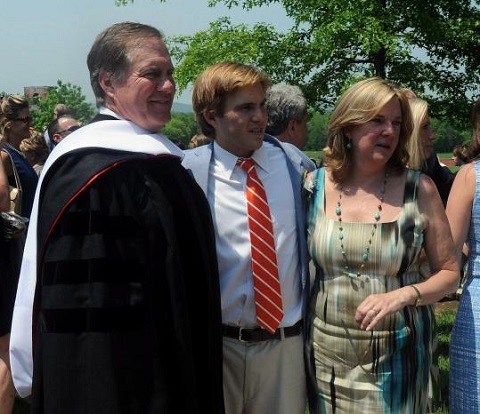 Their marriage was perfect until Bill's extramarital affair hit hard and scattered their marital bliss into millions of pieces. Their divorce was finalized in 2006.

Bill had an affair with Sharon Shenocca, a former secretary of the New York Giants.

All three children played lacrosse in college and are currently working as coaches.

Amanda is the Lacrosse coach at Holy Cross College, Stephen is the safeties coach for the Patriots, and Brian is a coach at Trinity College.

Debby and Bill with their children SOURCE: Affair Post

Graduated from Wesleyan University in 2007, she also played lacrosse. In July 2015, she was named head women's lacrosse coach at Holy Cross College in Massachusetts.

As of 2022, it's been sixteen years that Debby and Bill divorced. The world knows Bill has already moved on and is happily in a relationship with Linda Holliday, the Executive Director of the Bill Belichick Foundation. The coupled started dating in 2007.

On the other hand, Debby has distanced herself from the media. There is no information about her new relationship.

Debby Clarke Belichick is indeed a wealthy woman. Her major income source is her business. As of 2022, her et worth is estimated at $5 million.

Though there is no detail on Debby and Bill's divorce settlement, it is believed Bobby received millions of dollars in the settlement process.