Dean Deetz plays professional baseball for the Houston Astros as their pitcher in the minor leagues. Astros selected him in the 2014 Major League Baseball Draft in the 11th round while he made his MLB debut on September 5, 2018.

Dean was suspended for 80 games as he was found positive in drugs (i.e. Dehydrochlormethyltestosterone) which is a power-enhancing substance. He was suspended alongside his friends Jon Singleton who was suspended for 100 games. Before entering major leagues, he played for Greenville Stros, Tri-City Valley Cats, Quad City River Bandits.

Deetz was born as Dean A. Deetz in Nixa Missouri, the United States on November 9, 1993. Dean's total career earning is calculated around $1 million so far.

Dean is a young player of Houston which is why his salary is minimum that MLB has allocated. He earns $555,000 from Astros in 2019.

The MLB pitcher has made around a million till date from his baseball career and his net worth is assumed to be in 6-digit figures. 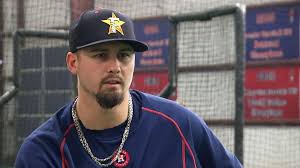 Despite being a renowned name in baseball, the details about his endorsement deals are not yet revealed. His teammates like Justin Verlander and Gerrit Cole are among the highest-paid players in MLB currently.

Not all the players are lucky enough to have a clean reputation as Dean was involved in taking power enhancing drugs. He was tested positive on drugs and was suspended for 80 games on January 22, 2018. In addition to this, he paid a fine of $238,251.

Besides Dean, his friends Jon Singleton was also suspended for 100 games after testing positive on drugs.

Dean is among those players who maintain a decent gap between their professional and personal life. Mostly, he remains low-profiled as he kept his official Instagram account private. Well, for his fans it might be disappointing not to find exact information on his relationship.

With the lack of information and his secretive nature, it can be assumed that he might probably have a girlfriend. Besides, he might not want to share his personal life details in media so he has kept all information private. Posts shared on his Twitter account doesn't contain a single hint which might put some light on his relationship.

Deetz started his schooling from the Nixa High School which is located in Nixa, Missouri. He played baseball for his high school team until he attended Northeastern Oklahoma A&M College. He played college baseball for until the 2014 MLB draft.

Watch his highlights from the 2017 season.

Stay with Playerswiki.com, for more information on MLB teams and players.