Daniel Girardi is a Canadian professional ice hockey player, before being drafted, Girardi played his first 11 seasons in the National Hockey Leauge (NHL) from 2006 till 2017 with the New York Rangers organization. The Candian currently plays for the Tampa Bay Lightning of the NHL.

Daniel Girardi was born in Welland, Ontario on April 29, 1984, to father Mark and mother Carol Girardi.

Girardi grew up idolizing former Rangers leader Mark Messier and Brett Hull even though he was eligible for the 2003 NHL Entry Draft, no NHL team felt he was skilled enough to play professionally in that level despite scoring 39 points in 68 games in the OHL.

Daniel was good on ice since his childhood.  He was also a member of the London Knights team that won the 2005 OHL Championship and the 2005 Memorial Cup during his junior career.

As Daniel was so passionate about the sports, he didn't give up and tried for several NHL teams, his effort paid back when The New York Rangers gave him one more try out and was invited to their training camp in the 2005-06 season.

Income and Net Worth of Girardi

Dan Girardi is a Canadian professional hockey player who has a net worth of $11 million.

During the 2013–14 season, on February 28, Girardi signed a six-year, $33 million extensions with the Rangers but on July 1, 2017, Girardi signed as a free agent a two-year, $6 million deal with the Tampa Bay Lightning.

Career and Achievements of Girardi

Girardi signed as a free two-way agent contract with American Hockey League (AHL) and Hartford Wolf Pack for the 2005-06 season. He made his NHL debut on January 27, 2007, after an injury to the Ranger's defenceman which they won 2-1 against Philadelphia Flyers.

During his time with the Rangers, Girardi was a key figure and was named as an interim alternate captain for the Rangers for the 2011-12 season.

Girardi was very quick on ice averaging nearly 28  minutes per game which earned him spot in the 2012 NHL ALL-STAR Game.

Girardi's solid defensive play in the playoffs was a key part in the Rangers' run to the 2014 Stanley Cup Finals, where they lost to the Los Angeles Kings.

During 2014-15 season Girardi became the permanent captain of the Rangers. With his solid defensive play  Rangers won the President's trophy as well as they went to the final of Eastern Conference but lost to Tampa Bay Lightning. 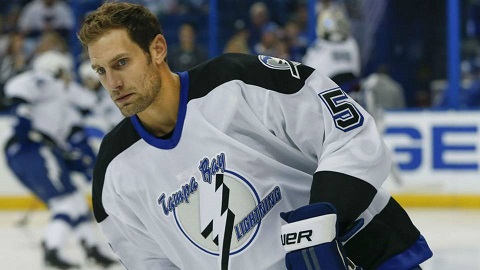 After a couple more impressive season with the Rangers, Girardi signed a two-year contract with the Tampa Bay Lightning on July 1, 2017, and he will be wearing the #5 jersey as he previously did with the Rangers.

Daniel had a long relationship with his then-girlfriend Pamela. The couple got married in a private ceremony, with some friends and family members making us harder to mention the actual date.

Since their marriage, the couple has had two kids son London and daughter Shaye Girardi. London who just turned 7 is playing in a hockey youth team coached by his former Lightning captain Vinny Lecavalier and Shaye is still in pre-k.