Daniel Vogelbach is an American professional baseball player who plays in Major League Baseball (MLB). Daniel Vogelbach currently plays for the Milwaukee Brewers as their First baseman in 2019. Daniel Vogelbach made his debut in MLB with Seattle Mariners in 2016 and also played for Toronto Blue Jays in 2020.

Daniel Vogelbach reportedly earns around $1,400,000 as his yearly salary from the Milwaukee Brewers as a first baseman Further, Daniel Vogelbach has an estimated net worth of over $2 million.

How much is Dan Vogelbach's Salary and Net worth in 2021?

Daniel Vogelbach has an estimated net worth of over $2 million in 2021 and will probably add some more amount of money in his future since he just started his MLB career. He signed a 1-year contract with Brewers worth $1,400,000 in 2020 and currently earns $1,400,000 as his annual salary.

Daniel Vogelbach so far has made earnings of $3,956,759 from his entire MLB career. Dan earned a sum of money around $558,600 as his salary from the Mariners team in 2019 while Edwin Encarnacion was on of the highest-paid players of the Mariners with an annual average salary of around $20 million. 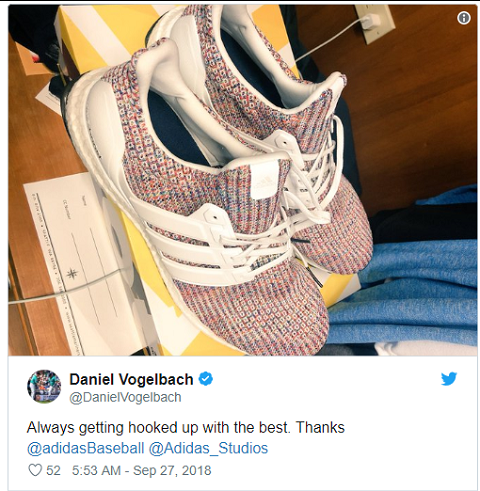 Daniel has an Endorsement deal with Adidas SOURCE: Twitter

In addition to this, Daniel Vogelbach also makes huge earnings from his endorsement deals with various brands. His major deal is with Adidas and keeps promoting the products of the brand on his social media

Does Dan Vogelbach have a girlfriend? Personal Details

The famous MLB star Daniel Vogelbach is an attractive individual with a charming personality. However, there is not even single news in any site or news portal about his relationship and affairs till date.

So far, Dan hasn't shared a single detail from which his probable wife or girlfriend can be assumed on the media. So there is no information confirming whether Dan Vogelbach is married or single or is dating someone. However, he posted a photo with a girl on his Twitter on 13 Sep 2012 with a caption "I've missed her" but hasn't revealed who she is. 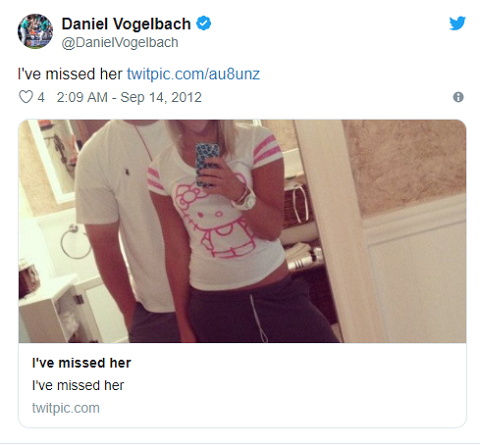 He rather seems to be focused on his career, rather than involving in rumors so he remains low profiled and that's why he keeps his love affair hidden from the general public.

The Famous MLB star is 6 feet tall in height and weighs around 113 kg. Currently,  Daniel Vogelbach is 26 years old.

Daniel Vogelbach was born on December 17, 1992, in Orlando, Florida, the United States to parents Dan Vogelbach and Jennie Vogelbach. Dan is American by nationality and belongs to the White ethnic group. Further, his star sign is Sagittarius. He grew up with an awesome childhood along with his siblings.

At the beginning of his professional baseball career, he played in the minor leagues for the Arizona League Cubs after being selected in the 2011 Major League Baseball Draft by the Chicago Cubs.

Dan played for the Cubs until 2016 and was later traded to the Seattle Mariners. In 2016, he was promoted to the Major League and his first game was against Los Angeles Angels.

During the 2017 season, Dan Vogelbach was placed as a reminder since the Seattle already had Yonder Alonso and Danny Valencia in their team as first baseman. He joined Toronto Blue Jays in 2020 and again moved to Milwaukee Brewers the same year.