How much does Morton earn as salary from the Tampa? What is his Salary and Net worth? Is he Married? Who is his Wife? Scroll down to know all the facts about the MLB pitcher.

Charlie Morton is a native of Flemington, New Jersey, born on 12th of November 1983, to Jeanne and Chip Morton, a former Penn State basketball player and an accountant. His grandfather is a former baseball player who had played in the Philadelphia Athletics farm system.

Morton was raised in Trumbull, Connecticut, where he played in little league. Growing up, he attended ballgames at a Yankee Stadium and idolizing Roger Clemens and Derek Jeter.

He enrolled at Joel Barlow High School, where he starred as a pitched, graduating in 2002.

In 2017, Morton signed a two-year contract worth $14 million with the Houston Astros. The contract guaranteed him $14 million, and an annual average salary of $7 million, because of which, his main source of income is regarded as Astros as of now.

He has so far earned $65,434,056 from his MLB career. As of 2020, the net worth of renowned baseball pitcher, Morton is under-review, but looking at his successful career, his net worth is assumed to be around $30 million.

In the 2002 MLB Draft, Charlie Morton was drafted in the third round by the Atlanta Braves. He spent the next five seasons with GCL Braves, Danville Braves, Rome Braves, Myrtle Beach Pelicans, and Mississippi Braves respectively.

On 14th June 2008, Morton made his MLB debut against the Los Angeles of Anaheim, where he earned his first win in the process.

On 3rd June 2009, Morton was traded to Pittsburgh Pirates along with Jeff Locke and Gorkys Henandez in exchange for Nate McLouth. On 10th June, he made his debut for Pirates, pitching an inning against the Atlanta Braves.

He played overall six seasons for the Pirates.

On 12th December 2015, Morton was purchased by Philadelphia Phillies in exchange for David Whitehead. On 23rd April 2016, he suffered a hamstring injury in a game against the Milwaukee Brewers and was placed on the disabled list the following day. Three days later, it was announced that Morton would miss the rest of the season with a torn hamstring.

On 16th November 2016, Morton arrived at the Houston Astros, signing a $14 million deal. He played two seasons and moved to Tampa Bay Rays in December 2018.

Who is Charlie Morton Wife?

In the year 2012, Morton tied the knot with his girlfriend, Cindy Morton after almost five years as they started dating each other in about 2007. 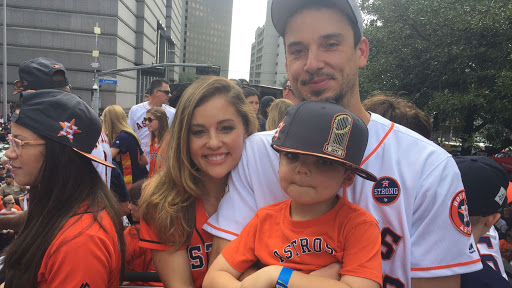 The couple welcomed their first baby boy, Cam in 2015. After two years, his wife, Morton gave birth to their second child via surgeries that Charlie himself had to go through to help out his pitching mechanism.