Corey Koskie is a former professional baseball third baseman from Canada who played professionally for multiple teams such as Toronto Blue Jays and Milwaukee Brewers. He was also a player at Minnesota Twins. After making a great contribution to his team, Koskie retired on March 21, 2009. In 2013, Koskie was inducted into the Manitoba Sports Hall of Fame.

The former baseball player started his professional career with the Minnesota Twins after getting drafted in the 26th round of the 1994 Major League Baseball (MLB) draft. Besides, he appeared in various games helping his teams to win most of them. Furthermore, he was also involved in multiple charities during his professional career. Also, Koskie supports fundraising activities for the Twins Community Fund.

Born on June 28, 1973, as Cordel Leonard Koskie, in Anola, Manitoba, Canada, he is 49 years old as of 2022. Koskie was raised in Anola, and he also practiced baseball by hitting rocks with a Wiffle ball bat. So, it is believed that he was interested in sports from an early age. 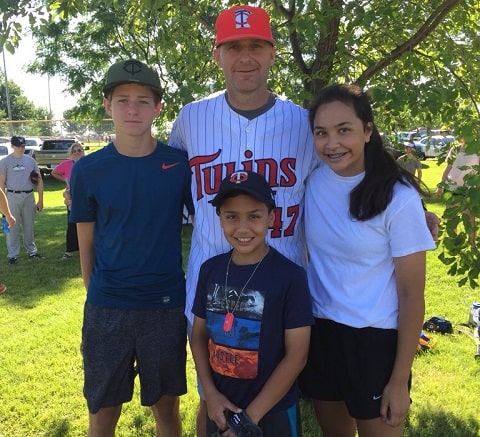 As a child, he took lessons in Ukrainian dance. Further, he also played ice hockey and volleyball. Besides, Koskie is a family person, but the details about his father and mother remain away from us.

As we talked about above, Koskie was interested in sports, and he played junior hockey for the Selkirk Steelers. During his college career, he was selected by Minnesota-Duluth. However, he chose to be with Garth Pischke at the University of Manitoba. And as a sophomore, he left the team and went on to play college baseball at Des Moines Area Community College in Boone, Iowa.

Furthermore, Koskie's professional career started with the Minnesota Twins team when he was drafted by them in the 26th round of the 1994 Major League Baseball draft. On September 9, 1998, Koskie made his MLB debut. In 1999, he gave an amazing performance which helped him establish a name for himself as the Twins' third baseman of the future. 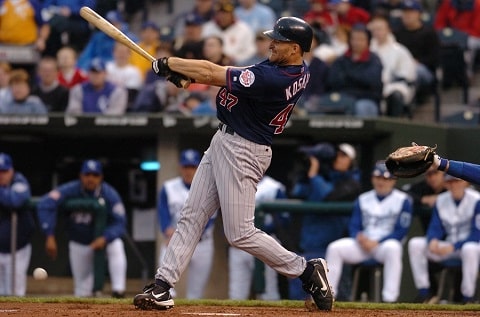 Corey Koskie hitting a shot during a match SOURCE: twinsdaily.com

After that, Koskie played for another team, and on December 14, 2004, the Toronto Blue Jays signed a three-year deal with Koskie. His 2005 season didn't go well due to an injury. Despite missing various games, his importance didn't go down. The Blue Jays team traded him to the Milwaukee Brewers on January 6, 2006, in exchange for Brian Wolfe.

The respective season was also harmed by an injury. On July 5, 2006, he sustained post-concussion syndrome. That injury not only caused him to miss major games in the 2006 but the whole 2007 season. And in the year 2009, he played for Team Canada in the World Baseball Classic. On February 28 of the same year, Koskie signed a minor league deal with an invitation to spring training with the Chicago Cubs. Finally, on March 21, 2009, he retired from professional baseball. Corey Koskie giving his best in a match SOURCE: bluebirdbanter.com

Throughout his professional career, Koskie played for multiple teams helping him preserve a decent fortune. In the 2006 season, his salary was $5.25 million, and the following year, his salary was $5.85 million. While playing with the team of Brewers, he received $2 million each season.

Similarly, the Blue Jays paid $3.25 million in 2006 and $3.85 million in 2007. So, earning such a huge amount of money, Koskie's net worth might be over a million dollars. The exact fortune is unknown, but some portals report it to be more than $1 million. 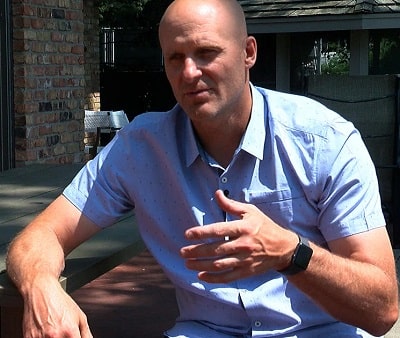 We can see various professional baseball players working with sports brands. During his professional career, Koskie may have worked with some brands or companies. This might have helped him increase his wealth. After retiring, Koskie has kept himself away from the media. Now, he might be engaged in some business from where he is making his living.

Koskie is a married man, and his wife's name is Shannon Koskie. They dated each other for some years before tying the knot. Due to their less presence in the media, none of us are aware of their wedding date. But we can be sure that Koskie's bond with his wife is increasing day by day.

Together with his wife, Koskie has four kids, all sons. Their names are Bradley, Joshua, and Caleb, but one of their identity is missing from the web. The family of six has kept them away from the media as all of them are of private nature, and they are also aware of their privacy. 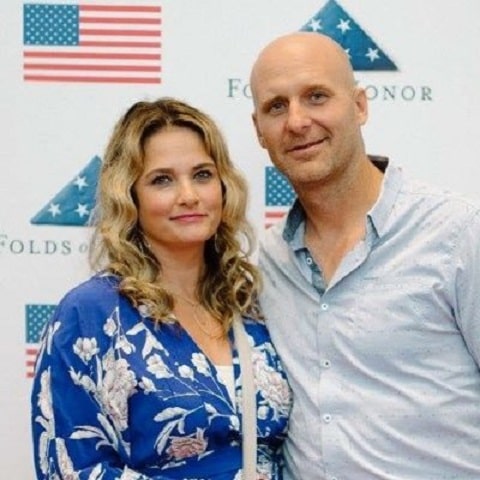 As per a report, the family also lived in Plymouth, Minnesota. They might be living in the same area, but the current status of their life is unknown.

The former baseball player does not have much presence on social media, but there is an account on Twitter that we can follow as @ckone47. The account does not appear to be official, but it has already gained more than 9k followers at the time of this post.

As talked above, Koskie is a person who keeps himself away from the spotlight. Apart from Twitter, we can't find his account on other networking platforms.

Facts To Know About Corey Koskie

Stay tuned to playerswiki for more content about the sportsman and their professional career.