Connor Sadzeck is an American professional baseball player who currently plays as a Pitcher for the Seattle Mariners of Major League Baseball (MLB). Additionally, he was initially drafted by the Texas Rangers in the 2011 MLB draft as an 11th round pick. Moreover, he made his MLB debut on September 1, 2018, playing for the Texas Rangers.

Born and raised in Crystal Lake, Illinois, Connor Sadzeck was born on October 1, 1991. Furthermore, Connor is an American native and belongs to the ethnic group of white. Also, Sadzeck was born under the star sign, Libra.

Holds A Net Worth Over $1 million

The 27 years old famous pitcher holds a net worth over $1 million, which is entirely generated from his professional career. Moreover, he earns $556,000 as an annual average salary and has colleceted $1,531,830 as entire career earnings, playing three seasons in the MLB.

Besides, he is 29th best-paid player of Mariners whereas Felix Hernandez and Kyle Seager are the top-paid players with an annual average salary of $27,857,142 and $19,500,000 respectively.

In A Relationship With Kendra Birtcher

Compared to his professional career, there is very few information about Connor's personal life and more importantly, about his love life. However, reports suggest that Sadzeck is in a romantic relationship with his girlfriend, Kendra Birtcher. 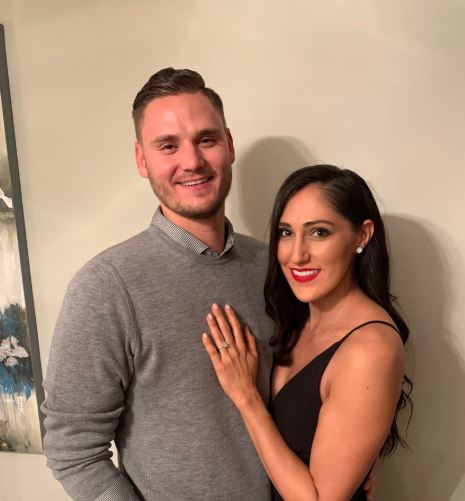 Reportedly, the lovebird made their relationship official in 2018, i.e., the year when Connor proposed his girlfriend.

Back on January 3, 2019, Sadzeck revealed that he and his girlfriend are engaged. He wrote that his girlfriend accepted his proposal- he posted picture with his girl and captioned:

"I didn’t think 2018 could’ve gotten any better until she said yes. I can’t wait to share my life with this beautiful woman."

As per the wedding registry site, amazingregistry, the couple is planning to get married on November 23, 2019.

As of 2019, Connor plays as a pitcher for the Seattle Mariners of Major League Baseball. Previously, he played for the Texas Rangers, and it was with Texas that he signed his first professional contract. Additionally, he was initially drafted by the Texas Rangers in the 2011 MLB draft as an 11th round pick.

Moreover, he made his MLB debut on September 1, 2018, playing for the Texas Rangers. He was transferred on April 1, 2019, by Texas Ranges to Seattle Mariners in exchange for Grant Anderson. As of now, he is playing along with some of the famous MLB players such as George Kirby, Domingo Santana, and many more.