Cole Caufield is an American ice hockey forward who is currently playing for the University of Wisconsin-Madison in the Big Ten Conference (B1G). Recognized as a generational sniper, he has represented USA Hockey National Team side U-17 and U-18 and currently holds the program's record for goals. What's more? the Montreal Canadiens have already picked him in the 2019 NHL Entry Draft.

Stevens Point, Wisconsin native Cole Caufield was born on 2nd January 2001, under the star sign Capricorn. He holds an American nationality and is of white ethnic background. Regarding his [hysique, the twenty years old stands 5 ft 8 in (173 cm) tall and weighs 162 lb (73 kg; 11 st 8 lb).

How Much Is Cole Caufield Net Worth In 2021?

Since Cole Caufield plays in the NCAA representing the University of Wisconsin-Madison. The college does not pay athletes in the manner of professional athletes, but it will allow student-athletes to profit from their name and likeness, as in endorsement deals and hiring agents. Further, the college provides scholarships to their athletes.

Besides, Caufield has played for the USA Hockey National Team. Don't know the exact figure but he receives a decent sum for playing in the national team. As of 2021, his net worth is under review.

Back in 2017, Cole Caufield shared a series of lovey dobby pictures with Taytum Geier, a St. Cliyd State Hockey player via Twitter on her birthday. The post was captioned, "Happy birthday to my beautiful girlfriend @Taytumtag! This doesn't mean you have more power in the relationship nowTwo heartsHave a great day:-) #17" 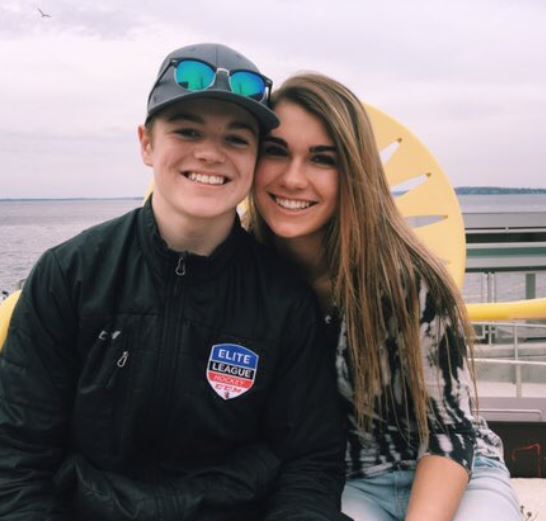 However, now the two have already broken up. Geier is in a new relationship while Cole Caufield has maintained his private life low key.

Came From A Ice Hockey Family

Cole Caufield is Kelly and Paul Caufield, a former ice hockey player who played for the University of Wisconsin–Stevens Point (UWSP) from 1988–92, remains the team's all-time leading scorer. In 2002, he returned to UWSP as an assistant coach. In 2006, he became manager of Ice Hawks Arena.

Further, his grandfather, Wayne Caufield, is a semi-professional hockey who played from 1963–76 for various teams, most notably the USHL's Milwaukee Admirals. After his retirement, he spent over two decades coaching youth hockey and managing hockey clinics in the Milwaukee area. Also, he was a member of the Wisconsin Hockey Hall of Fame since 2011. On 13th July 2018, he took his last breath.

On November 19, 2017, Caufield committed to play collegiate hockey for the University of Wisconsin–Madison beginning in the 2019–20 season. Considered a top prospect among North American skaters entering his draft year, he would earn an A rating by the NHL Central Scouting Bureau. On June 21, 2019, he was selected 15th overall by the Montreal Canadiens in the 2019 NHL Entry Draft.

At the international level, Caufield plays for the United States. He represented the US in several international tournaments, U-17, including the 2017 World U-17 Hockey Challenge, where he recorded 13 points in six games (eight goals, five assists) to win a gold medal.

Under-18, at the 2018 IIHF World U-18 Championship, Caufield recorded six points in seven games where the United States would settle for a silver medal after losing the final game to Finland 3–2.

On April 23, 2019, Caufield scored his 10th and 11th goal for his national side in just four games of the preliminary round at the 2019 IIHF World U18 Championship, breaking a record set by both Brett Sterling in 2002 and Phil Kessel in 2005 (nine goals).

Caufield was named the MVP of the championship and Best Forward (Directorate Award). Eventually, he led the competition in goals and was named to the tournament All-star team.