Apart from playing for Dodgers, he has played in the minor leagues and won the National League Rookie of the Year.

Cody Bellinger's Net worth and Salary in 2019

Bellinger has an estimated net worth around $2 million as of 2019, mostly earned through MLB career.

Currently 23, he stands at a towering height of 6 feet 4 inches and weighs around 95 kg. Talking about his personal life, he was in a relationship with his girlfriend, Melyssa Perez.

She is of Latin heritage, who according to sources tells that she is pre Law student of Texas university. 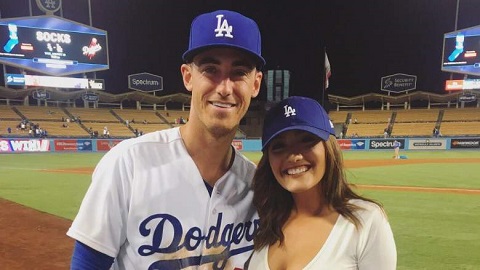 He is noted for bringing her stadium to watch and cheer for his team and himself. However, the duo went on a couple of dates last year and wasn’t serious. Analyzing their respective social media accounts, it doesn’t look like the two are a couple anymore.

Cody Bellinger is of American nationality. He was born to mother, Jennifer Bellinger, and father, Clay Bellinger in  Scottsdale, Arizona, the USA on  July 13, 1995.

His father Clay Bellinger was also a former player of Yankee team and is currently a fighter, his mother, Jennifer Bellinger is Cabi Stylist.

He also has a sister, Ashli Bellinger who plays volleyball at  Vanguard University and also has a younger brother, Cole Bellinger was drafted by San Diego Padres in the 15 round of the MLB Draft in 2017.

After playing as an amateur player and later on playing for several minor leagues, he signed with Major League Baseball team, Los Angeles Dodgers where he was selected in the fourth round in the 2013  draft on June 13, 2013, for a signing bonus amount of $700,000.

He made his professional debut with the Arizona League Dodgers and recorded batting score of .210 in 195 appearances at the plate.

Bellinger also won the National  League Rookie of the Year in 2017. The award that has been to bestowed to Baseball legends such as Willie Mays and Darryl Strawberry.

Bellinger later made his debut for Los Angeles Dodgers in the left field against San Franciso Giants on April 25, 2017, and recorded one hit and one intentional walk.

He later went on to set a record for most strikeouts in the single postseason with recording 29 strikeouts with 17 strikes that he made in the World Series.

As of 2018, his stats have recorded such as  Batting average of .269 and scoring 43 runs in his MLB playing career so far.