Chun In-gee is a rising South Korean professional female golf player who turned professional in 2012, soon after graduating from her University. She has fourteen professional wins in her career, including three LPGA tours, Ladies European Tour, LPGA of Two Japan Tour, and Ten LPGA Korea Tour. Gee has been playing professional golf at the LPGA of Korea Tour and LPGA Tours.

Chun In-gee was born on August 10, 1994, in Gunsan, South Korea. She seems to be the only child born to Chun Jong-jin and his wife, Kim Eun-hee. She came into the limelight only after her successful carer in golf, so there is not much information about her early life with the media. Chun graduated from Korea University. Chun represented the Republic of Korea at the 2016 Rio Olympics. Talking about her physical appearance, Chun is five feet and nine inches tall and weighs 70 kgs.

How Rich is Chun In-gee? Know About Her Career Earnings, Net Worth, and Prize Money

Chun has an estimated net worth of more than $4 Million. She has been making a considerable sum from her golf career. A golf player does not need to win a tournament to earn money, He/she earns as per their tour scores. Also, Chun must be earning a hefty net worth from her sponsors, advertisement, and endorsement deals. Gee was sponsored by LG Electronics for three years, from 2017 until 2010. 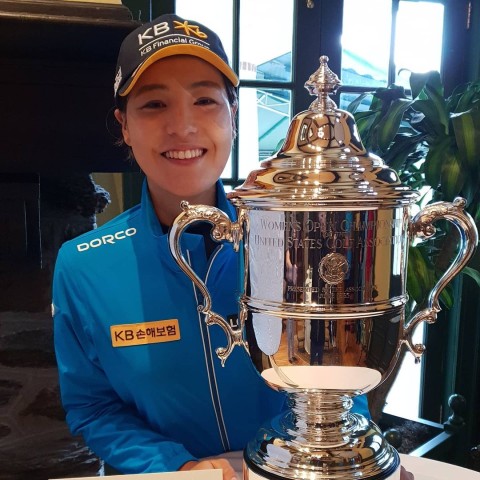 Chun with her US Open title SOURCE: [email protected]_dumboo

Last season, the South Korean golf player reached the $4 Million mark in official career earnings when she finished in the top-10 at the AIG Women's Open. Although she made her professional debut in 2012, Chun did not earn much from her early career wins. In 2016, Chun made $1,501,102 form her single season. She won the 2016 Evian Championship and the Vare Trophy.

Chun is an active social media user. She keeps posting her photos in her account regularly. Following her Instagram post, It seems like Chun is living a single happy life on her own. She is very close to her family and likes to spend her free time with her friends and family. There have been no rumors of her dating someone. Chun is very much early in her career and must be focusing on her career.

South Korean Native Chun started playing from her High School Days. She turned professional while; She was in her University. In-gee had won more than five LPGA of Korea Tour before making her debut in the American LPGA. Chun made her debut in LPGA 2015 and won the U.S  Women's Open in her Rookie year.

In 2016, Chun won Evian Championship and also was part of the 2016 Rio Olympics. She won the LPGA Rookie of the year Award. In-gee also won a European Tour in 2017. In 2021, In-gee ranks at number 61 in the World Golf Ranking. Chun is part of the Gainbridge Open along with Ryann O'Toole.