Chuck Schumer is a well-known American politician. He is currently serving as the Senate Minority Leader since 2017. He holds a strong Democratic political background. He is also a member of the Democratic Party and is also a senior United States senator from New York.

Chuck Schumer was born Charles Ellis Schumer on November 23, 1950, in Brooklyn, New York City. He is among the three children born to Abraham Schumer and his wife, Selam Schumer. He has a brother named Robert Schumer and a sister named Fran Schumer. His father ran an exterminating business, and his mother looked after their house and their children. Chuck graduated from James Madison High School in 1967 and was reminded of Valedictorian, scoring a perfect SAT score of 1600. He later enrolled at Harvard and graduated with a degree in Law.

Soon after graduating from the New York State Bar examination. He ran for New York State Assembly. To everyone's surprise, He won the election finding his place in the assembly. In 1981, Chuck ran for a vacant House seat for Holtzman. The Harvard graduate made it to the United States House of Representatives in his first attempt. He has never lost any elections to date from that day onwards.

Schumer first ran for the Senate in 1998. He won the party ticket with 51 percent of the votes and later defeated then three-term incumbent Al D'Amato. He was in the committee of then-President George W. Bush's decision made for terrorists in military tribunals amid Washington concerns. After he arrived in the Senate, Schumer has been involved in several reforms and bill amendments.

Chuck Schumer has an estimated net worth of $1 Million. He has accumulated most of his net worth by serving in the United States House of Representative and Senate. Also, He is a Lawyer by his educational qualification. 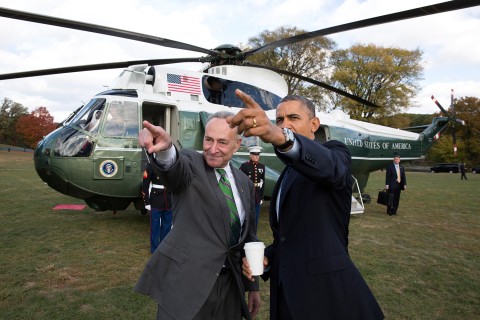 The average salary of a U.S Senator is $174,000 per year. This is just the salary. It does not include the benefits like the staff and travel allowances, which average more than $3 million per senator. Chuck has been in the Senate for more than two decades and works for various other committees, which add extra money to his account.

Chuck is living a happy married life with his wife. Chuck tied his wedding knot with Iris Weinshall on September 21, 1980, at the World Trade Center's north tower. Iris is a Chired Operating Officer of the New York Public Library and the former vice-chancellor at the City University of New York. 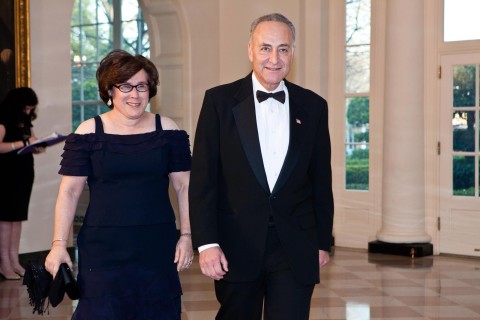 Chuck with his wife attending an event in White House SOURCE: The Sun Co Uk

Schumer is the proud father of two children, Jessica and Alison. Like that of their father, Both of them are Harvard graduates. His daughter Jessica gave birth to a son, Noah making Chuck a grandfather. The Schumer family is living a happy life. His son, Alison, works for Facebook and is also a  marketing manager for a New York-based company.