Carlos Ruiz aka Chooch is a Panamanian professional baseball player who is currently a free agent. In 2008, Ruiz helped the Philadelphia Phillies win the World Series.

Ruiz has played Major League Baseball (MLB) for teams including Philadelphia Phillies, Los Angeles Dodgers and Seattle Mariners. Ruiz is already married and has two children from his relationship.

Carlos Ruiz was born on 22nd January 1979, in David, Chiriquí, Panama. His father Joaquin Ruiz was a police officer and mother Inocencia Rios, an elementary school teacher. Ruiz grew up along with his two siblings. Ruiz belongs to a Panamanian nationality.

Carlos Ruiz made his professional baseball career debut in 1999 in playing for Dominican Summer League (DSL) team DSL Phillies. He played 60 games and made the record of 305 batting average, 4 home runs, and 35 runs batted in (RBIs). Later, Ruiz signed for Philadelphia Phillies and made his debut for the team on 6th May 2006.

During the 2008 season, Ruiz focused predominantly on defense. With the help of Ruiz, the Philadelphia Phillies was able to win the World Series in 2008. Moreover, during 2012 season, he was named to his first career All-Star game.

Ruiz played regularly for Phillies until 2015 season. On 25th August 2016, he Phillies traded him to the Los Angeles Dodgers. Ruiz backed up Yasmani Grandal appearing in 14 games and hitting 278. During 2016 season, Ruiz was traded to Seattle Mariners and currently, he is a free agent.

Even being such a popular baseball player, Carlos Ruiz often keeps his personal details under the shade. However, Ruiz is a married man and has two children from his marital relationship. But yet, he hasn't revealed the identity of his wife. 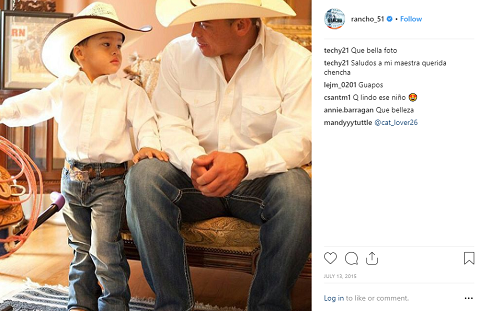 His first child, son Caros Jr. Ruiz was born in 2003. Likewise, on 2nd March 2011, his spouse gave birth to the second son. The couple named their second child as Carlos Ruiz. Ruiz shares adorable photos of his sons on his Instagram.

For long, Ruiz and his wife, are successfully maintaining their relationship. So far, the pair hasn't been the part of controversy regarding their divorce. Other than this, Ruiz hasn't dated any other girls, and there are no any rumors of his affairs too.

Carlos Ruiz Net worth and Salary

Carlos Ruiz earns a fortunate amount of money from his career as a baseball player. As of 2018, the estimated net worth of Ruiz is $18 million. He has been playing baseball for long and has played in Major League Baseball (MLB) for popular teams.