Cameron Percy was born on May 5, 1974, in Chelsea, Victoria, Australia. He came into the limelight only after years of hard work and dedication so, there is not a single word about his early life and his parents' in the media. Talking about his physical appearance, Cameron stands six feet and weighs 82 kgs.

How Rich is Cameron Percy? Know His Earnings, Prize Money, and Net Worth

Cameron Percy has an estimated net worth of more than $4 Million. He has earned most of his net worth from his successful career in golf. Percy has earned the most from Shriners Hospitals for Children Open, which is worth $400,000. Second on the list is Safeway Open with $350,000. Cameron must be making a reasonable amount from his sponsors, advertisement deals, and contracts. 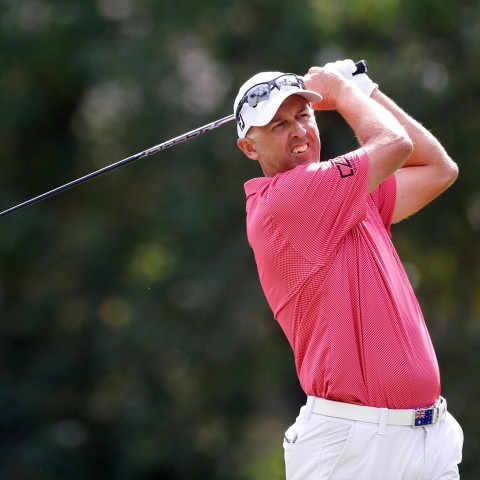 Cameron has been playing golf since 1998 SOURCE: Whooshkaa

In the ongoing season of 2021, the Australian Golf player has already earned more than $315,000 from his nine events where has finished in the top 10 in an event. Last season, Percy took home $470,000 from seventeen events. He made cuts in eight matches. Although Cameron started playing professional golf in 1998, he could not make it to the top until 2009.

Married Life of Cameron Percy; Who is his Wife?

Cameron Percy tied his wedding knot with his longtime girlfriend, Katie Percy, in the early 2000s. The love birds had a private wedding ceremony. Soon after the wedding, the love birds welcomed three children, Liam, Ashton, and Tyler. The family of five is living a happy life.

It's been almost two decades of their marriage, but there have been no rumors of the couple having ups and downs in their marriage life. Cameron spends his free time with his kids and takes them to watch his matches regularly.

The Australian golfer made his PGA Tour debut in 2010. In 2014, Cameron won the Price Cutter Charity Championship. He is among the oldest players to play the games with Vijay Singh.