Brittany Altomare is a well-known American professional golf player. She currently competes in the LPGA Tour. Brittany started her career with Symetra Tour. She has won just a single event in her professional career- the 2016 Guardian Retirement Championship at Aymtera Tour. Almora turned professional in 2013 and has been playing ever since.

Brittany was born on November 19, 1990, in Worcester, Massachusetts. She is the only child born to Tom Altomare and his wife. Her father was also an avid player but only played at the local level. Brittany started playing golf at the age of 10 and has had her father as a major influence. After graduating from High School, Brittany enrolled at the University of Virginia. Altomare stands five feet and six inches tall and weighs 60 kgs.

Brittany Altomare has an estimated net worth of more than $2 Million. She is ranked among the highest-earning female golf players in recent days. However, Brittany has not been able to win major titles but has earned huge sums from her events. Altomare did win a major amount in her rookie year. In 2016, She took home her first six-figure amount of $164,000 from eighteen events. 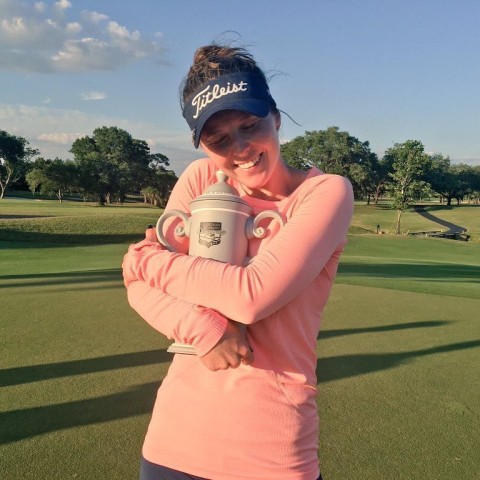 In 2017, Brittany took home $656,000 from twenty-six events when she made cuts in twenty events. She lost the final at the Evian Championship against Anna Nordqvist. In 2018, Altomare crossed her million-dollar earnings marks when she made $511,750 from twenty-eight events. The following season, the golf player crossed her $2 million marks in official career earnings with her T2 finish at the Volunteers of America Classic.

In 2019, Altomare earned $878,000, which remains her highest earnings in a single season to date. Last season, Brittany earned $228,000. She is very much early in her career and shall be making much more in the days to come.

Who is Brittany Altomare's fiance? When will she Marry?

Brittany is living a happy engaged life with her fiance Steven Stanislawzyk. The couple has been engaged with each other for around two years. Her boyfriend Steve proposed to her with an engagement ring getting down on one knee on the Lawn in front of the Rotunda on the UVA campus.

Altomare was scheduled to tie her wedding knot with her longtime boyfriend in Italy in October 2020 but had to postpone for a year due to the COVID pandemic. The love birds are in a relationship for more than three years.

Brittany Altomare started playing golf at the age of ten. She played in the Junior Ryder Cup in 2006, where she represented the United States. Altomare turned professional after graduating from her university in 2013. She came into the limelight only in 2016 when she won her first event at Symetra Tour of Guardian Retirement Championship.

Altomare came very close to winning her first PGA Tour event at the 2017 Evian Championship but lost in the final. The following season, She was the runner-up at the Buick LPGA Shanghai. Brittany is currently ranked at No. 47 in the world golf ranking, and Ko Jin-young stands at No.1 golfer.