Brian Duensing is an American professional baseball player who plays in the Major League Baseball (MLB). Currently, Brian plays for the Chicago Cubs as their pitcher in 2019. Besides, Duensing also played for other teams like Minnesota Twins, Kansas City Royals, and Baltimore Orioles.

Brian Duensing is receiving $3,500,000 as his annual salary from the Chicago Cubs team as in 2019. Further, he has an estimated net worth of over $10 million.

Is Brian Duensing Married Or Single? Know About His Spouse

Brian Duensing is married to his lovely and beautiful girlfriend Lisa Duensing since 2006. The couple dated for several years before tying the knot. 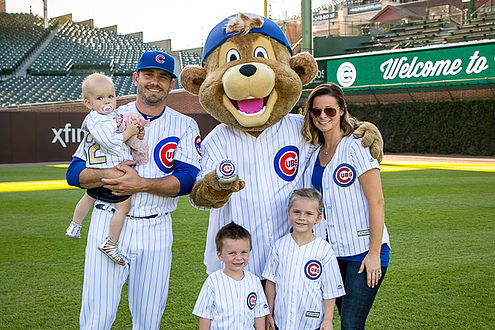 Brian and his spouse Lisa are parents to three kids but he named and other facts related to their children are still unavailable. Besides, the couple hasn't reported any disputes in their marital life.

Also, Brian hasn't mentioned his past affairs or relationship on the media. Despite his busy schedule, Duensing manages time for his family and kids.

The famous MLB player has a height of 6 feet 1 inch tall and weighs around 93 kilograms. Currently, Brian is 36 years old.

How Much is Brian Duensing's Net Worth and Salary in 2019?

Brian Duensing has a total estimated net worth of around $10 million in 2019. In addition to this, Brian is currently receiving a quite good amount of money from the Chicago Cubs which is around $3,500,000 as his annual salary.

As we discuss his estimated career earnings, Brian has made a decent amount of money around $17,302,500 from his MLB career until 2019 and is still in his playing career.

Brian Duensing has recently signed a two-year contract with the Chicago Cubs on January 17, 2018, which is worth $7 million. Furthermore, the contract also guarantees a sum of around $7 million.

Brian Duensing was born to parents Kent Duensing and Shari Duensing on February 22, 1983, in Marysville, Kansas. Brian is of American nationality along with white ethnicity.

Brian completed his graduation from Millard South High School located in Omaha, Nebraska, and also played high school baseball there. After that. he joined the University of Nebraska for his University career and was a friend to Alex Gordon and Joba Chamberlain.

Soon after Brian ended his University career, he was drafted in the 2005 Major League Baseball draft by the Minnesota Twins where he played for the team in the minor leagues. Duensing made his major league debut with the Twins team in 2009 against Chicago White Sox.

After playing with the Twins for over several seasons, Brian was released in 2016 and was signed by Kansas City Royals and played for a season with them. In addition to this, Duensing also played for the Baltimore Orioles in the minor league in the 2016 season.

Currently, Brian Duensing is playing for the Chicago Cubs team where he sighe=ned a two-year contract on January 17, 2018, and is playing alongside Kris Bryant and Tyler Chatwood.