Brandon Hagy is an American professional golfer. Turned professional in 2014, he currently competes in PGA Tour. He finished his collegiate career playing for the University of California, Berkeley (California Golden Bears).

Santa Monica, California native, Brandon Hagy was born on 21st March 1991, under the star sign Aries. He is the son of Rick and Karyn Hagy. He has a younger brother named Brett Hagy. The thirty years old holds an American nationality and is of white ethnic background.

Besides the prize money, a golfer makes a good sum of money through endorsements but Brandon Hagy has not mentioned one. As of 2021, his net worth is estimated at $2 million.

Brandon Hagy and Jay Hagy have been together for a long-time now. It's unclear that when the two started dating but they came out publicly on Instagram in October 2016. 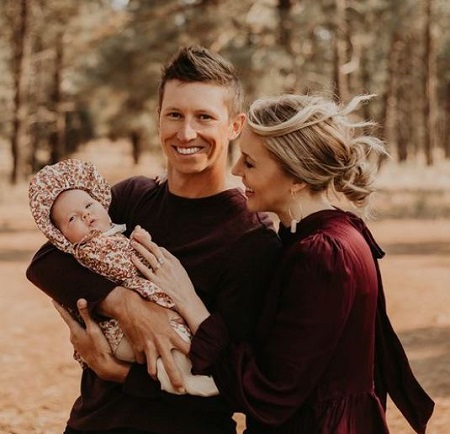 In June 2019, Brandon proposed to Jay and tied the knot in January 2020.  Later two months, they announced, "We’re having a baby!!!" via Instagram. In August 2020, their baby girl, Hunter Reese Hagy was born.

Besides, the family owns a dog, Archie.

Brandon Hagy turned professional in 2014. He competed in Web.com Tour Q School however he failed to reach the final stage which led him to no status on any major tour in 2015.

In the 2015 season, he made six starts on the Web.com Tour and eight on the PGA Tour, including the 2015 U.S. Open through sponsor exemptions and Monday qualifying, That season, he earned a spot through local and sectional qualifying.

In 2016, he had five top-ten finishes in 16 events which ranked him, 19th on the regular-season money list. He earned a PGA Tour card for the 2017 season.

For the 2017 season, Hagy was not considered a PGA Tour rookie. He recorded a top-5 finish at that season's RBC Canadian Open, earning himself the 2017 FedEx Cup Playoffs and finish the season 113th to retain his Tour card for 2018.

Following wrist injury, Hagy missed most of the 2018 season. He came back was healthy again in the following season (2019) and made a number of starts on PGA Tour.