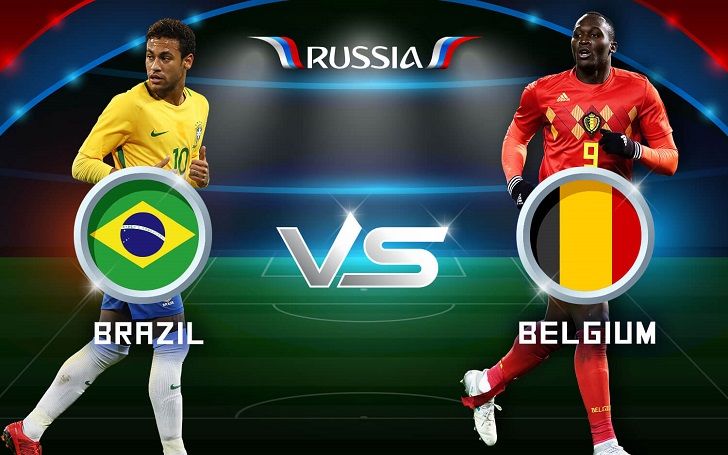 Things getting hotter with World Cup 2018 reaching the quarterfinals. This Friday, Brazil will go on a destiny deciding match against Belgium in the second match of quarterfinals, the winner being awarded the place to semi-finals. Brazil made a 2-0 win over Mexico in the Round of 16, while Belgium's troubled game with Japan was worth watching eventually winning by 3-2.

Already the winner of World Cup glory for 5 times, Brazil is only 3 wins away to set 6 stars in the jersey and on the other hand, Belgium carries the hope of millions to make up to glory for the first time. The 2 nations are set to clash for the 5th time in history, and probably you won't want to miss the match.

When and Where will be the kickoff?

Brazil and Belgium will go head-on-head at Kazan Arena on Friday, July 6, 2018, while the kick-off time is scheduled for 7 pm BST.

The winner of this match will be playing with the winner from Uruguay vs Frace, playing earlier at Nizhny Novgorod Stadium.

The live match will be available at BBC One and BBC 5 (commentary) for English fans, while Fox is at the service for American fans. The FIFA member countries can enjoy the quarterfinal match on the national channels in their television.

For online viewers and travelers, the live-stream will be eased via BBC iPlayer, apple store, and play store apps. Be wise to choose the best one cause the showdown of World Cup has begun.

Brazil and Belgium have confronted each other 4 times before, Selecao recording 3 victories in their name and 1 by Belgium. The nations met most recently in the 2002 World Cup:  Round of16 stage, where Rivaldo and Ronaldo's goal led a 2-0 win for Brazil.

Brazil is playing the quarterfinal for the 7th successive World Cup, being knocked out in each of the last 3 tournaments by a European side(France in 2006, the Netherlands in 2010 and Germany in 2014).

Inside News and Lineups

Brazil is with the disadvantage as Casemiro is suspended after picking up a second yellow of the tournament, however, the hopes rise up with Marcelo, expected to return in the match against Belgium after missing Round of 16 and Fernandinho to replace Casemiro.

Gabriel Jesus yet to score in 4 games could be substituted with Roberto Firmino as Firmino came off the bench for a 4-minute cameo against Mexico and scored.

As for Belgium, no injury concerns is out.

The possible lineups are:

The odds of the team to win World Cup are: