Entering the 2016 MLB season before two months of his 43rd birthday, Colón is the oldest active player in Major League Baseball. He is the oldest MLB player to hit his first career home run at 42 years old. Colón was born on May 14, 1973, to Miguel and Adriana and grew up in the town of Altamira in the Dominican Republic.

Colon was signed by the Cleveland Indians as a free agent in 1993. Two years later, he was named the Indian' 1995 Minor League Player of the Year. In 1997, playing for the Buffalo Bisons, he became the only player in the team history to throw a no-hitter at Coca-Cola Field. The same year, in April, he made his Major League Baseball debut.

The next year, he set the modern-day (unofficial) MLB record for throwing the most pitches (20) in a single at-bat on June 26, against Ricky Gutierrez. Colón has a win-loss record of 247-188, run average of 4.12, and 2,535 strikeouts. With the New York Mets (in August 2014), he recorded his 200th win in a 5-4 victory over the Phillies and while doing so became the third Dominican-born pitcher after Juan Marichal and Pedro Martinez. 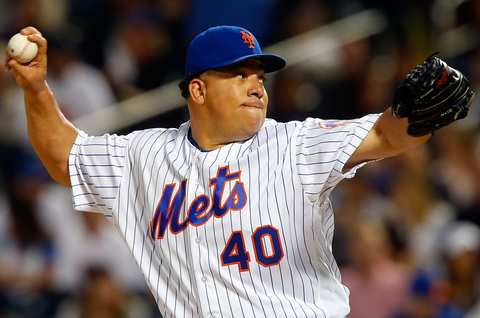 Bartolo Colon holds the record for most career wins by a Latin American-born pitcher. SOURCE: MLB

Against Washington Nationals on opening day 2015 (whilst still pitching for the Mets), he became the third opening day pitcher over 40 years old to strike out eight batters, after Cy Young and Nolan Ryan. He is the first pitcher ever to record wins against the same team (the Baltimore Orioles) whilst playing with the seven different clubs.

On June 9, 2015, he created a new record of most consecutive decisions as a starting pitcher, making 26 decisions in 26 consecutive starts. On October 1, 2016, Colón became the 47th player ever to make 500 career starts. He is also the 18th pitcher to record wins against all 30 MLB teams.

A career win on June 18 against Kansas City (as a Texas Rangers' pitcher) moved him past Juan Marichal to become the pitcher with most career wins from the Dominican Republic. He has a Guinness World Records certificate for being the oldest player in the majors to hit a home run. Colón is currently assigned with the Acereros de Monclova of the Mexican League.

Bartolo Colón's Net Worth and Salary

Throughout his career, Colón has had series of agreements worth millions of dollars with some of the richest clubs in MLB. In January 2009, he got a $1 million contract to return to the Chicago White Sox. Three years later, on January 14, 2012, Oakland Athletics secured him for one year, $2 million worth contract. At the end of that season, the A's extended his contract one more year in a deal then valued at $3 million.

In December 2014, the New York Mets provided him with a 2-year deal worth $20 million. After the end of the very term, the Mets offered him one additional contract equal to a little over $7million.

In November 2017, Atlanta Braves gave him a one-year, $12.5 million contract. To put into perspective, Colón contracts value alone amounts to more than $45 million. Having said that, it's hardly a surprise to read sources reporting his net worth of $55 million. Spotrac states, to date, he has raked in combined salaries worth $107 million - for the 21 seasons, he's spent in the MLB. For the same time frame, his career signing bonuses have been estimated at around $8.5 million.

Who is Bartolo Colón's Wife?

It was at the age of 13 when Colón met his future wife, Rosanna in the Dominican Republic. Together, they have four sons, Bartolo Jr., Emilio, Wilder, and Randy. 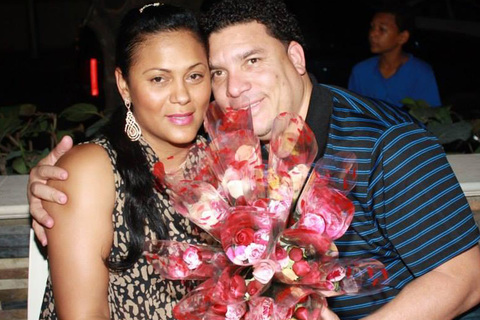 Bartolo Colon Colón met his wife, Rosanna in the Dominican Republic when he was 13 years old. SOURCE: The NY Post

The family resides in New Jersey. In 2015, Colón was sued by Alexandra Santos, a Washington Heights woman in Manhattan seeking child support for her son and daughter, who were fathered by the baseball star during his marriage to Rosanna. 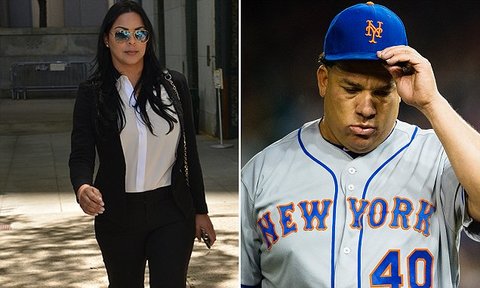 In 2015, Bartolo Colón was sued in Manhattan by a Washington Heights woman (left) seeking child support for her son and daughter, who were fathered by Colón during his marriage with Rosanna  SOURCE: Daily Mail

With the New York post in 2016, Colón's wife confirmed that she was aware of her husband's second family and the then-pending lawsuit. The 5-foot-11 hurler and Santos later agreed to a deal that included child support payments. Sources report, the affair took place when Colón was not having a good relationship with his wife, Rosanna.