As of present, Adam lives a retired life with his wife Natalie Croker. The AFL legend has done a great service to football and has given hope to a lot of young people trying their best to make it in football. Here we have the details about his married life with his wife.

Before their marriage, Adam and Natalie had been going out for two years. During the Easter weekend,  they got engaged. Their marriage was a small and intimate ceremony which took place on the south coast of New South Wales and consisted of twenty people.

They were planning a huge celebration of over 200 people which took place two months after the couple secretly tied the knot.

The party was attended by all his friends from the Sydney Swans and his family. It took place at Carriageworks in Eveleigh. Goodes dressed casually in a white shirt with his top button undone while his wife rocked a sparkling silver jumpsuit.

At present, the couple lives in North Bondi.

How is their Married Life Going?

When it comes to his private life, Adam and Natalie both are very secretive. Even their marriage took place privately. Except for a few vague comments, not much is known about his personal life. This leaves us with very limited information about his life as a husband. 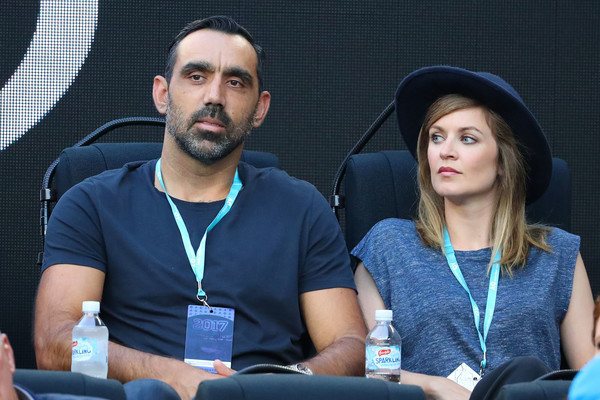 Adam said that his marriage is good and he has nothing to complain about. Apparently, the couple has a strong support from his friends and family. He also mentioned that his family is special to them. This is the main reason why he doesn't share much information about them.

The AFL is yet to decide on his future prospects. The AFL has Goodes on its crosshairs ingenious Commission role. Gillon McLachlan mentioned that he has a potential to be an outstanding candidate. However, Adam says that he has to decide on his post-retirement future and wants to do what he likes for now.

Love when family visits and I have time to take them to one of my favorite places. @shania_rose_sansbury98 had just as much fun as me thanks @natalie_goodes for the ????#Taronga #family #conservation #Sydney

As for now, He is spending his days in peace: visiting several locations and making the most out of his retired life.