Gossip Is Apolo Ohno Married? Who is he Dating? Know about his Girlfriend and Affair

Is Apolo Ohno Married? Who is he Dating? Know about his Girlfriend and Affair

Apolo Ohno is an eight-time Olympic medalist speed skater, a former winner of Dancing With The Stars, and once a host of the popular TV show, Minute To Win It. He is one of the most celebrated Winter Olympians of all time and also a New York Times bestselling author.

A look at Ohno's Instagram shows that he's always in the mood for supporting the team USA, loves to travel, and also posts a lot about his girlfriend. Ohno has made it crystal that there's no one he'd rather be with than the person he is currently dating. Know the fullest details there is to know about Ohno's dating life and more with us in the content that follows.

Eight-time Olympic medalist Apolo Ohno is in a relationship with his girlfriend Bianca Stam for the last five years. Apolo and his partner Bianca are dating each other since 2016. His girlfriend Stam was born in Chicago and is a former student of Millikin University. While in Hongkong she used to work as an actress and a model. Stam is also the producer of the 2017 short documentary The Beauty Machine. 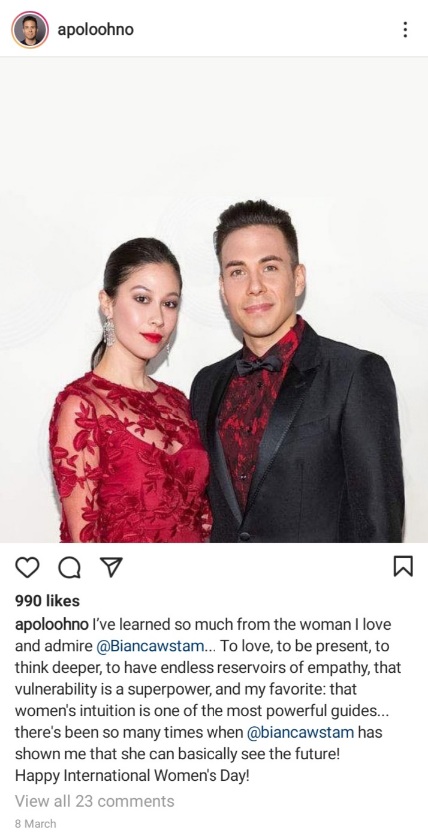 Sources claim that she is fluent in Mandarin, Taiwanese, Cantonese, Italian, and English. Some of the movies that the half Italian, half Chinese actress has had a role in include The Dark Soul, Chasing The Dragon, and Deviants.

It has been reported that Stam is also an investor in an Italian restaurant, Bar Roma located in Chicago. Chicago Tribune says that Ohno and Stam first met in 2016 at an art gallery. However, it wasn't until Lebron James' The Wall, where Ohno made his first appearance with Stam on reality TV.

The couple doesn't have kids yet, but, they are keeping themselves busy with their dog Sesame Mocho Ohno. The duo also can't seem to get enough of each other. At least that's what their Instagram accounts show. The couple can be seen throwing sweet posts at each other throughout their respective social media handles.

Be it Women's day, a vacation in Europe, Valentine's day, or appearing as a pair on a reality show, the relationship of Ohno and Stam can't be more Instagram official.

Despite all this frankness about their love, Ohno and Stam are yet to give a name to their relationship. Though, earlier this year in January, the gold medalist posted a doting picture of him on a beach with Stam and thereby captioning it, "Happy Anniversary." The 31-year-old Olympian further added, "I can't believe you've put up with me this long. Growing old is such a gift - I am blessed to be by your side." 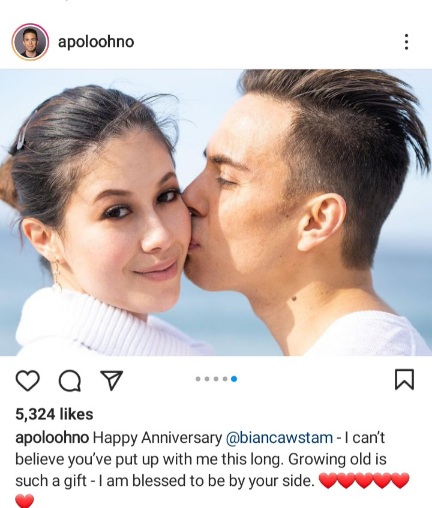 The internet community, however, still hasn't figured it out as to what mark the couple was celebrating- the first meet, the first "I Love Yous", the ring, or the marriage, itself.

Before Stam, Apolo was seemingly in a romantic relationship with Allison Baver, an American short-track speed skater. The two, however, ended their union in 2009 having kicking it off at some point in 2004. 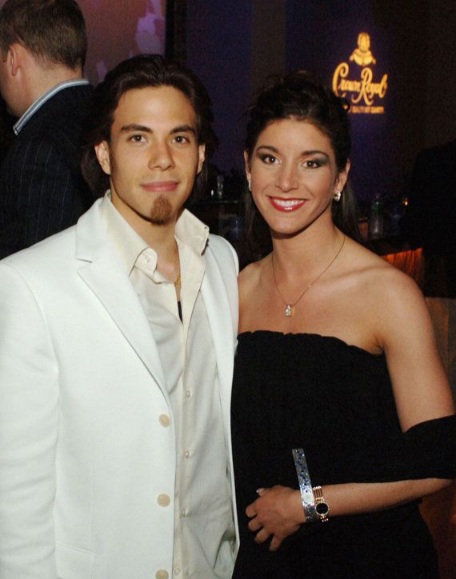 Back in October 2014, the Seattle-born star was seen with a mystery girl in Maui, Hawaii just after he had competed in the 2014 Ironman World Championships event in Kona the same month. 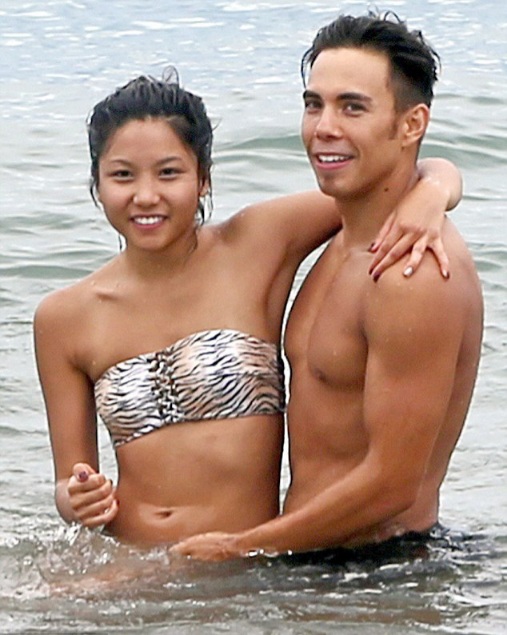 Apolo Ohno was spotted with a mystery girlfriend in Hawaii in October 2014.  SOURCE: FameFly

The pair at the time was spotted surfing and by each other's arms in the water. While the identity of the raven-haired lady remains a mystery to this day, at those moments, the pair seemed to have had a natural and quiet and amorous rapport.