Angela Akins is an American journalist who formerly worked as a reporter on Golf Channel. She has also worked as a reporter and co-host on several FOX Sports Southwest programs. Akins is popular as the wife of a Spanish professional golfer Sergio Garcia who competes on both the PGA Tour and the European Tour. The love birds have been married for more than four years.

Angela Akins was born on October 25, 1985, in Marble Falls, Texas. She is among three children born to Martin Ray Atkins and his wife, Pam Akins. Her father is a former college All-American football player and politician. Angela has an elder sister named Tara Atkins, who is also an athlete.

Angela Akins Net Worth and Earnings 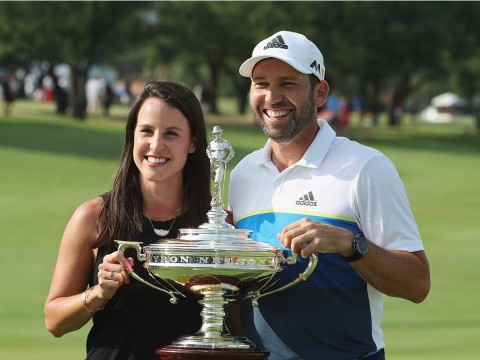 Angela's husband, Sergio, has an estimated net worth of more than $100 Million. He is ranked at No. 9 in all-time Money Leaders in American Golf with $52,084,522. Adam Scott and Rory Mcllroy have ranked just ahead in the list.

He must have huge earnings from his sponsors like Adidas, Omega, BMW, Super Stroke, Credit Suisse, and a few more.

Mother of a Two Children; Who is her Husband?

Angela Akins walked down her wedding aisle with Sergio Garcia in July 2017. For this beautiful and lavish wedding ceremony, The duo called only a few members from both the families and some close friends. They had been dating for some time before tying their wedding knot. 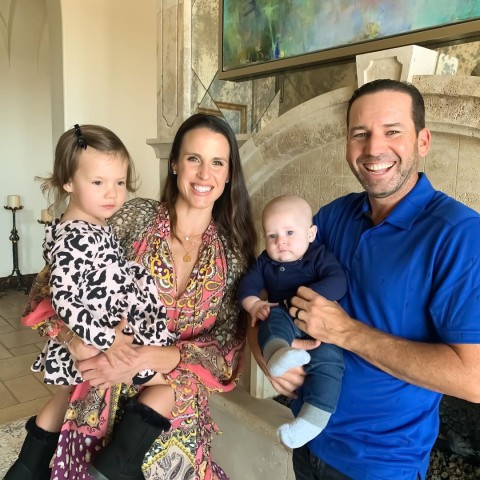 Sergio shares a photo with his wife and their children SOURCE: [email protected]

Soon after the wedding, In Match 2018, Angela and Sergio welcomed their first child, a daughter, Azalea. In early 2020, the pair opened about expecting a baby. In April 2020, Angela and Sergio were blessed with a son, Enzo. The family of four is living a happy and blissful life.

Angela was previously married to her former husband, Ross Hammann. As per sources, she divorced her first husband in 2015. The journalist is yet to share information about her first marriage.

Career As Journalist and Golf Player

Angela played golf in her school days and won 10 tournaments in a short span of her High School Career. She gained 17 medals in national championships and became a Women’s Texas Golf Association Amateur Champion on one occasion. However, Akins turned into journalism, leaving behind golf.

After graduating from Texas Christian University, Akins began her career as a reporter for Fox Sports Southwest. She was part of a program called Fox Football Friday and was the co-host of the program. She even covered the four-hour highest shows, college football, in the Southland Conference. At the end of 2015, The journalist started working for the Golf Channel as a reporter and on-air personality.