Andrew Cogliano is a Canadian professional Ice-hockey player who plays in the National Hockey League (NHL). As of 2019, Andrew Cogliano currently plays for the Dallas Stars as their Left wing. Andrew Cogliano has played for other teams like Edmonton Oilers, and Anaheim Ducks.

Cogliano has an estimated net worth of over $12 million. He reportedly earns around $3,250,000 as his yearly salary from Dallas Stars. Further, Andrew is married to his beautiful wife Allie Bertram.

Andrew Cogliano Net Worth and Salary

Andrew Cogliano so far has made earnings of $24,995,610 from his entire NHL career whereas Phil Kessel is one of the highest earners of the NHL with career earnings of $65,502,866.

His career contract and earnings:

Andrew Cogliano is married to his wife, Allie Bertram. The couple tied a knot on 2017 but first started dating each other in 2010. The couple together went to Italy for a vacation and also attended the Tuscan Wedding. 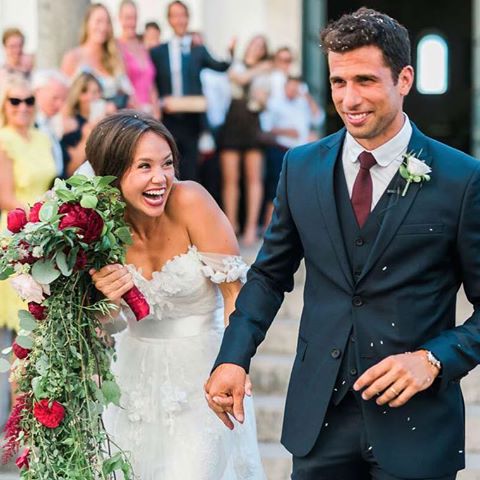 Andrew and Allie also had their vacation in Vatican City and The Amalfi Coast.

Additionally, the couple seems to be happy with the relationship as they frequently post a picture of them, enjoying a vacation together in their social media accounts.

Andrew Cogliano was born on June 14, 1987, in Toronto, Ontario, Canada to Teri Cogliano (Mother) and the details about his father is still not in the media.

As per his nationality, he is Canadian and belongs to the White ethnic group. Further, his star sign is Gemini. Further, he grew up with his brother, Matthew, who is an elementary school teacher.

On May 2, 2007, he signed a professional contract with the Edmonton Oilers, the team that drew him 25th overall in 2005. On October 8, 2007, he scored his first NHL goal against the Detroit Red Wings, beating goaltender Dominik Hašek.

His statistics, along with fellow Oilers sophomore Sam Gagner, slightly declined in his second NHL season.

As part of the reconstruction process of the Oilers, Cogliano was traded on July 12, 2011, to the Anaheim Ducks in exchange for a draft pick in the 2013 NHL Entry Draft.

For Cogliano, who recorded double digits in goals each year except for that season, the 2015-16 season. Despite his goal slide, he played with Ryan Kesler and Jakob Silfverberg on a line, whose "shutdown" play helped the team reach the playoffs for the fourth year in a row.