Amy Mickelson initially "Amy McBride" is the wife of the multi-millionaire Phil Mickelson who is a well-known personality in the golfing industry. She attended Arizona State University for her collegiate years and was a member of the Phoenix Suns cheerleading squad. She is a strong woman who has survived breast cancer with support from her husband and her family. She is a former model, Activist, and Actress. She had always harbored the role of becoming an Actress.

Amy was born in 1972. Her birth details are kept private and haven't been revealed in any media. She resides in Rancho Santa Fe, California alongside her husband and three beautiful children.

Amy Mickelson Net worth; Her Husband's Golf Earnings and Properties

Since the 50-years-old is a housewife and a full-time mother to her three children, she doesn't have any net worth of her own but shares her husband's net worth, which is an astonishing $375 million according to the reports from Forbes and Express.co.Uk.

Phil Mickelson has won $91 million in cash prizes from his professional career. He has won 44 PGA tours and five Major championships and ranked second behind Tiger Woods for most years. His sponsors are Amgen, Callaway Golf, Intrepid Financial Partners, KPMG, Rolex. His biggest paycheck comes off the course from his sponsors which is around $40 million annually. 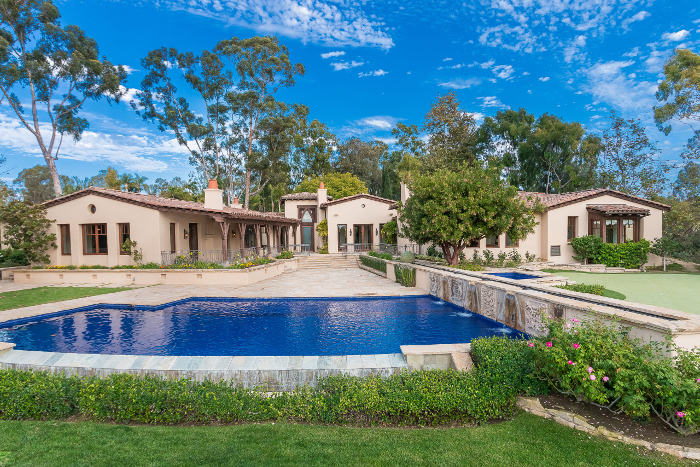 Amy has been supporting her husband in all of his games and has been for him mentally helping him. She does everything that she can for Phil.

Furthermore, she always wanted to be an actress but gave up on her acting career for her family. Being the wife of a pro golfer, she might also receive endorsement deals from various companies but the details of which are not revealed in any media. 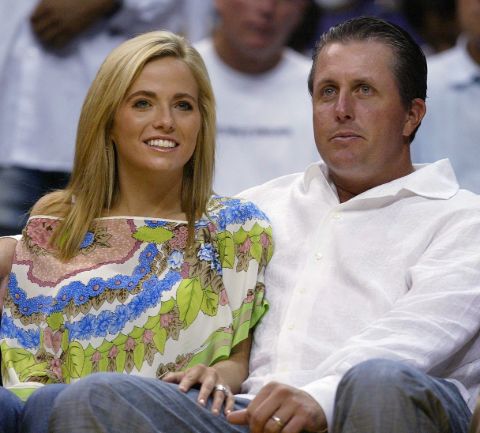 Nonetheless, she is living a fancy and lavish lifestyle with her husband and children from her husband's career earnings as a Pro Golfer.

After dating for four years, Phil Mickelson and Amy Mc Bride were married on 16 November 1996. The couple hasn't shared any information regarding their marriage life besides the marriage date.

One of the most successful marriages in Pro Sports history. They met each other during their college years. She was a junior and she performed for the Pheonix Suns cheerleading squad in the NBA. 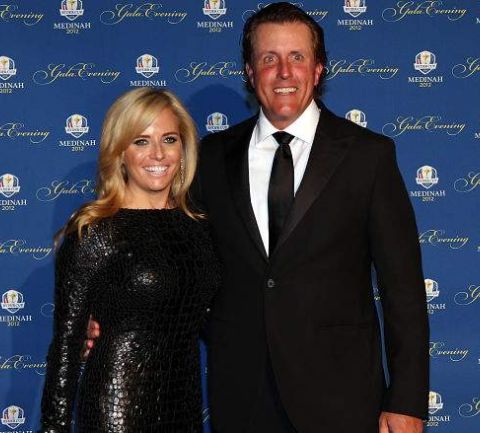 Phil met Amy when he was a graduate at Arizona state university. He was already a prominent golfer when he approached Amy. They became close friends after they met. They went on their first date to play tennis. At first, Amy didn't know Phil was a Pro golfer but assumed him to be working at a golf store.

The couple has been together for 23 years to date and is happy in their relationship without any controversies and affairs. Phil is as romantic as he can be when he is with Amy and Amy is together with him in good times as well as bad times. She has been supporting him in his tournaments since the starting days before marriage.

However, there was a complication during the birth of Samuel which nearly took the lives of both Amy and her son. She suffered a ruptured artery in her Uterus. But with quick and decisive actions of doctors and nurses, both Amy and Evan made it through, although they were in a delicate condition for some time.

Who is Phil Mikelson?

Philip Alfred Mickelson is an American Professional Golfer who is nicknamed Lefty. He turned professional in the year 1992. During his career, he has won 44 events on the PGA Tour including the major championship. He has won three Master's Titles (2004, 2006, and 2010), a PGA Championship in 2005, and an Open Championship in 2013.

Mickelson is among the 12 players in golfing history who have won three of the four major tournaments. As mentioned, he has won every major except the U.S Open where he has been a runner-up six times. He has spent over 700 weeks in the top 10 and has also reached a career-high ranking of No. 2 several times.

He is known for his left-handed swing even though he is right-handed which is the reason for his nickname and has also been inducted into the World Hall of Fame in 2012. He is ranked #61 by Forbes at 2019 highest-earning celebrity with a whopping $48.4 million earnings.

In 2018, he won his first tournament with a playoff victory against Justin Thomas at the WCG-Mexico Championship.

The couple started their Foundation named "Phil and Amy Mickelsonwhere she organizes awareness campaigns regularly. The main aim of the Foundation is to operate exclusively for charitable, educational, and scientific purposes. 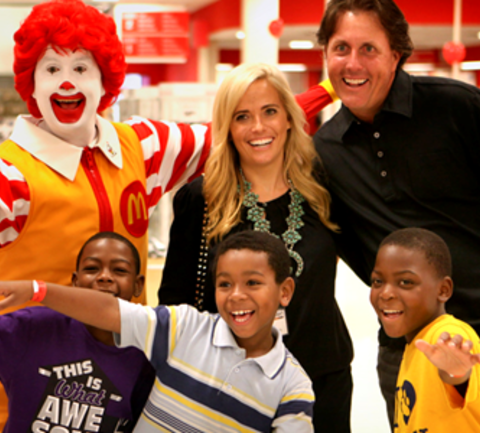 The 5' 5'' Amy changing lives one at a time SOURCE: Phil Mickelson

Since its inception in 2004, the Phil and Amy Mickelson Foundation has focused its interest primarily on supporting a variety of youth and family initiatives. The Foundation also provides financial help to the Army veteran, Youth, and families.

In September, The Phil and Amy Mickelson Charitable Foundation donated $100,000 to aid victims of Hurricane Harvey in the Houston area. Having many professional and personal ties to the city of Houston, Phil and Amy were deeply saddened by the devastation caused by Hurricane Harvey.

The best memory that the couple shared was when Phil pranked Amy as per Phil's Book. Phil wrote a note and wrapped it around his room key and asked Bones Mackay to hand it to Amy. When Bones handed it to Amy, the room key fell to the ground.

According to Amy, "I didn't understand why he handed it to me because Phil was standing on the edge of the green with a big grin on his face. When I opened the note, the hotel room key fell onto the ground. And the ladies who were standing around me just gasped. Well, I was so mad, I picked up the key and threw it at Phil as hard as I could."

However, Amy has a good sense of humor, which led the couple to take their relationship to the next level. They got married on 16 November 1966, as reported.