Akshay Bhatia is a rising American professional golfer who has been playing professional golf since 2019. Bhatia won ST 11 @ Old South Golf in his rookie year, an event on the Swing Thought Tour, by three strokes. He won several amateur tours in his amateur career.

Akshay Bhatia was born on January 31, 2002, in Northridge, California. He is among the two children born to Sonny Bhatia and his wife, Renu Bhatia. Bhatia has a sister named Rhea. Bhatia graduated from Wake Forest High School and skipped University to turn into a professional. Bhatia stands six feet tall and 59 kgs.

Akshay Bhatia's Earnings, Prize Money, and Net Worth in 2021 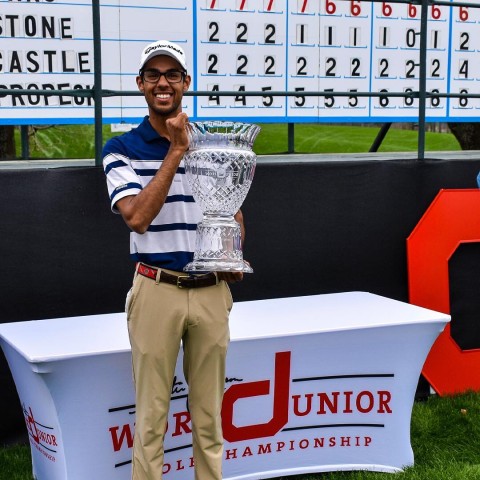 Bhatia took home $166,000 from his two games in Safeway Open. Also, he made $17,000 from Mayakoba Golf Classic. Besides, he also earns from several sources like prize money, endorsement deals, sponsorships, and contracts. He is just 19 and doesn't have any endorsement and sponsorship deals yet.

Who is Akshay Bhatia Dating? Know About His Girlfriend and His Relationship Status

Unlike other golf players, Akshay is not much open about his relationship status with the public. However, To everyone's surprise, Bhatia is involved in a romantic relationship with his girlfriend. He is an active social media and keeps posting photos and videos but hasn't shared anything about his love life.

Akshay is yet to utter a single word about his relationship with the public. As per sources, In 2020, His sister and his girlfriend traveled 820 miles to reach Melreese Country Club in Miami for Minor League Golf Tour.

Bhatia started playing golf from class 8. He played with the winning team of the 2017 Junior Presidents Cup. Akshay came into the limelight after winning several amateur events in 2018. He won two silver medals at the 2018 Summer Youth Olympics and was part of the Junior Ryder Cup. Also, the teenage golfer was runner-up at the 2018 U.S. Junior Amateur and was ranked in the top 10 in the Junior World Ranking.

After graduating from His School in 2018, Akshay turned professional in 2019. He made his professional debut at the Sanderson Farms Championship. Right before turning professional, Bhatia won the 2019 Jones Cup Invitational. The golf player played just six events in 2020. In 2021, Akshay has played in 4 events and won the Swing Thought Tour.