Adam was born in Scranton, Pennsylvania, on November 11, 1989. He is the son of Kelly and Rick Rippon, and eldest among six children. Born with hearing disability, Adam had to undergo a surgery just before his first birthday at Yale University, after which he could hear almost perfectly.

Adam's mother used to take him to the rink and they used to skate together. She saw that Adam was very good at it and by the age of 10, he started coaching under Yelena Sergeeva from 2000 to 2007.

Net worth and Income of Rippon

It is not clear how much Rippon earns through his participation in various competitions and international tournaments. He also makes few appearances in television shows. He receives the prize money from the country with every medal won.

According to the various website, Rippon's estimated net worth is around $1.3 million. However, there aren't many sources to back this evidence.

The career of Adam Rippon

Adam was assigned to a spring international, Triglav Trophy in Slovenia after he won the silver medal at the 2005 U.S. Championships. He competed in the Junior division and won the gold medal finishing first. 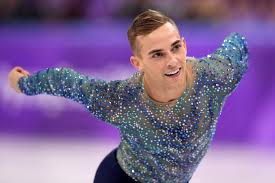 After moving to the senior level Grand Prix, Adam was assigned to compete at the 2008 Skate America but he came eight. He then announced his coaching change on January 2, 2009, and moved to Toronto, Canada, to begin his training with Brian Orser.

In the 2011-2012 Grand Prix events, Rippon was assigned to Skate Canada and Trophee Eric Bompard where he came at 4th -place in both events. He was assigned to the 2013 Four Continents but had to withdraw following his ankle injury.

Rippon won gold at the 2016 U.S. Championships and was placed sixth at the 2016 World Championships in Boston where the audience gave him a standing ovation. This year saw Adam qualify for the first time to the Grand Prix Final and he finished 6th at the event in Marseille, France.

On January 6, 2017, Rippon fractured his left ankle and left foot and had to withdraw from the 2017 U.S. Championships. After his recovery, he came back for the 2018 Winter Olympics along with other athletes like and won a bronze medal for his team and country in Pyeongchang, South Korea.

Being a gay for his whole life, On October 2, 2015, Rippon publicly came out about his status and announced that he is gay life another figure skater Johnny Weir, and proud of it and in March 2018, he appeared at the 90th Academy Awards wearing a harness designed by Moschino.

On April 13, 2018, Rippon participated on season 26 of Dancing with the Stars as one of the celebrities where his professional partner was Jenna Johnson.

As of now, Adam says that he had many celebrity crushes but still is single and he hopes he will find someone who he loves and can get married to. He has a very good friendship with Ashley Wagner.