Aaron Wise is an American professional golfer currently competing on the PGA Tour, having won 1 title at the AT&T Byron Nelson in 2018. He finished his collegiate career at the University of Oregon. To date, he has three professional wins and is ranked No.49 in the official world golf ranking.

Cape Town, South Africa native, Aaron Wise was born on 21st June 1995, under the star sign Cancer. He is the son of Marc Wise and Karla Kane. The family relocated to California when he turned three and settled in Lake Elsinore, near Los Angeles, and attended Santiago High School. He has three younger siblings, including his sister, Jena Wise, a high school tennis and swimming star in Lake Elsinore, and two half-siblings from his mother's re-marriage.

Siz seasons as a professional golfer as earned Aaron, name, fame, and the tremendous sum of fortune. His career earning are listed below the table:

Besides purse from tournaments, the golfer has endorsement deals. Along with various brands, he is popularly endorsed by Nike.

In October 2019, he gifted her sister a new Corvet who recovered have from fractures.

As of 2022, Aaron Wise has an estimated net worth of $5 million. Currently, he resides in  Las Vegas, Nevada, and has a pretty lush lifestyle.

Wise's love for golf grew watching his father play as a kid. In 2016 with Golfweek, he disclosed “The story is, I learned to walk with a golf club.” But his passion for the sport faded during middle school as he began to get burnt out. His parents warned him they would drop him off at the golf course for not taking practice seriously.

Later, his father, Marc took Aaron out of tournaments for two years. He continued to play golf for fun and also focused on tennis, but return to competitive golf and once again found his intimate love for the sport. He credits his dad for taking him out of the golf for two years.

Aaron Wise is off the market: the tennis player is currently dating Reagan Trussell who is University of Oregon’s Acrobatics & Tumbling alum. She finished her senior season on the Ducks acrobatics and tumbling team with a top/tumbler score. 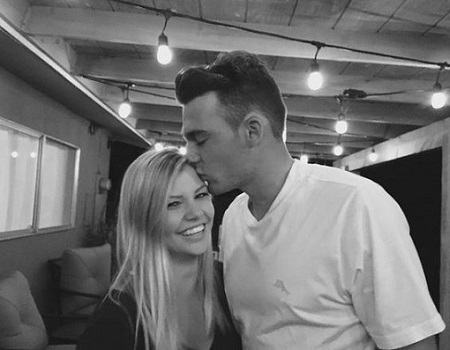 In July 2017, Wise first came out public with his girlfriend with a post on IG with the caption, “Can’t believe I get to call this girl mine ?” Same as Wise, Trussell grew up in California, in Irvine, enrolling at Woodbridge High School before attending the University of Oregon.

Turned professional in 2016, Aaron Wise made his debut after qualifying for the U.S. Open, which is his first major championship appearance. Further, he won the Syncrude Oil Country Championship on the PGA Tour Canada. For the 2017 season, he finished fourth on the Order of Merit and earned a Web.com Tour card.

On 18th June 2017, he won the Air Capital Classic in Wichita, Kansas, which earned him a PGA Tour card for the 2018 season. That season, he finished 18th on the Web.com regular-season money list and was promoted.
In May 2018, Wised earned his first PGA Tour win at the AT&T Byron Nelson in Texas, on his 18th start as a member of the tour. The victor led Wise from 99th to a career-best 66th in the world rankings. Additionally, he won the 2018 PGA Tour Rookie of the Year award.