As an Outfielder, Aaron Altherr reportedly earns around $1,350,000 as his yearly salary from Philadelphia Phillies. Further, Altherr has an estimated net worth of over $1 million.

Also, he is married to his beautiful wife, Samantha Chavez.

To whom is Aaron Altherr Married?

According to the reports, Aaron Altherr is married to his lovely wife, Samantha Chavez. The couple reportedly dated for some time before exchanging the marriage vows on 20 November 2016.

How was Aaron and Samantha's Wedding?

The couple had a very beautiful wedding ceremony held at The Wigwam. Samantha looked stunningly beautiful in the white gown designed by Morgan Co. Aaron wore a white shirt and suit and black pant with a black bowtie. 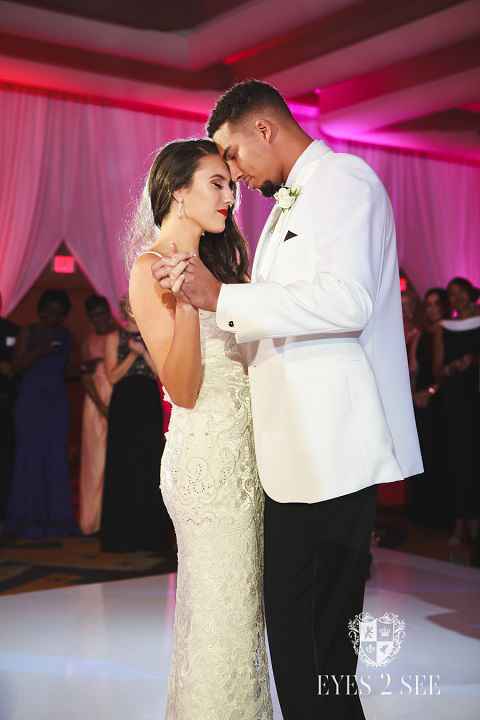 The ceremony was attended by the couple's friends, family, and relatives. There was the presence of 85 people in their marriage.

How did they first meet?

Aaron and Samantha in an interview revealed that they met each other on Facebook and planned their first date through Facebook.

Altherr proposed his girlfriend for marriage in their anniversary which Samantha hadn't expected. The couple went for the dinner after Samantha replied with ' Yes'.

Despite the busy schedule, Aaron spends quality time with his spouse and his family. Being married for this long, they haven't had their first baby yet. Maybe, they aren't ready for the new chapter of their life.

Who is Samantha Chavez?

According to the social media of Samantha, she is a model for Michelle Altherr Couture.

What an amazing day this was!! Got to marry my best friend. Loved my gown Michelle Altherr made??. She is so gifted it's unbelievable!! pic.twitter.com/draILmBDVy

Moreover, the owner of Michelle Altherr Couture is Michelle who is the mother-in-law of Samantha. Mainly, she wore Michelle's brand on her big day- her wedding day.

Talking about his physique, the famous MLB star is 1.95 m in height and weighs around 86 kg. Further, he has a world-class athletes body. Additionally, he has a huge number of followers in his Twitter account but he is yet to be found on Instagram.

How Much is Aaron Altherr's Salary and Net Worth in 2019?

As of 2019, Aaron Altherr has an estimated net worth of over $1 million. He reportedly signed a 1 year $1.35 million contract with Philadelphia Phillies on January 11, 2019.

His career cash earnings, including bonus and incentives:

Further, the famous athlete earns an additional amount of money through various endorsement deals. However, he hasn't revealed any information regarding his association with different brands.

Aaron Altherr was born on January 14, 1991, in Landstuhl, Germany to parents Frank Altherr and Michelle Altherr. As per his nationality, he is German and belongs to the mixed ethnic group. Further, his star sign is Capricorn.

The Phillies pried him away from a commitment to the University of Arizona with a $150,000 signing bonus. He also received Division I scholarships for his basketball skills. He was assigned to the GCL Phillies, where in 28 games to finish 2009, he hit .214 with 1 HR and 11 RBI.

In the ninth round of the 2009 Major League Baseball Draft from Agua Fria High School in Avondale, Arizona, Altherr was drafted by the Philadelphia Phillies. Altherr played in the qualifying rounds for the 2013 World Baseball Classic for Germany's national baseball team.

Altherr was brought back to Philadelphia on 16 June 2014. He recorded his first hit in the Major League, a double RBI against Toronto Blue Jays Mark Buehrle.  On January 11, 2019, Signed a 1 year $1.35 million contract with Philadelphia (PHI), avoiding arbitration Currently, he is sharing the field with the famous starting pitcher Zach Eflin.