Will Borgen is an American professional ice hockey player playing defenseman for the Seattle Kraken of the National Hockey League (NHL). The Minnesota native went to Moorhead High School, where he played for the school team. He led the team in his final year as captain. Later, he joined the Omaha Lancers in the USHL to complete the 2014-15 season.

Furthermore, Borgen began his collegiate career with the National Collegiate Hockey Conference's St. Cloud State University. In his college, he majored in sports management. In a game against Western Michigan, Borgen recorded his first collegiate goal. Later, he was selected for the NCHC All-Rookie team. In his junior year, Borgen recorded a career-high to receive NCHC Defensive Defenseman of the Year.

Borgen's Salary and Contract at Seattle Kraken: His Net Worth Revealed 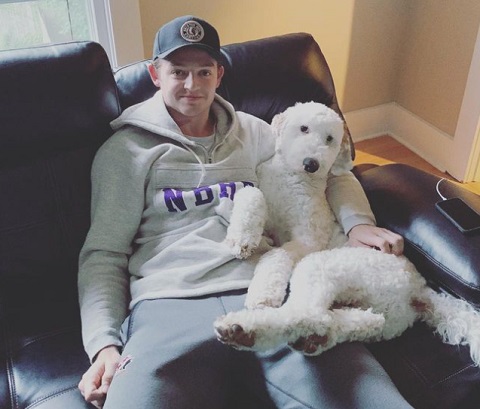 Will Borgen with his pet dog.  SOURCE: Instagram @willborgen

Before that, Borgen had an entry-level deal with Buffalo Sabres. During that time, he earned around $864,166 as his salary. Playing with them for some seasons, the professional ice hockey player accumulated $2,592,500. As mentioned earlier, Borgen is a part of the national team, and by representing them, he may earn fair cash.

Is Will Borgen Dating Someone or Single? Relationship Status

Borgen is single and is not dating anyone. None of his Instagram posts hints at the ice hockey player having a girlfriend. Since 2019, he has been posting on Instagram but has never shared a photo with ladies. In the past, Borgen has not been involved in rumors about his love life. 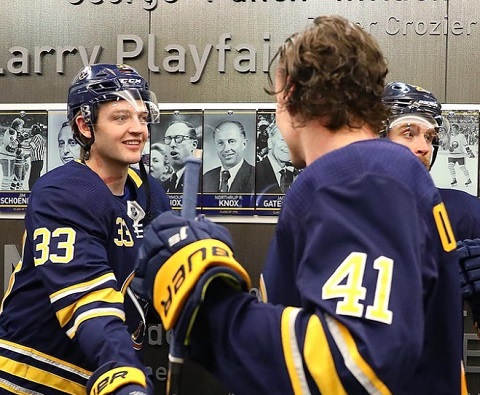 Will Borgen with his teammate in a game.  SOURCE: Instagram @willborgen

From this, it is believed that Borgen has also not dated anyone in the past. At the time of this post, he has just made four posts on Instagram. Like Cayla Barnes, Borgen is also a private person who prefers to stay lowkey rather than expose every detail with the press.

Everything on Will Borgen's Professional & International Career

Borgen was drafted by the Buffalo Sabres in the 2015 NHL Entry Draft with the 92nd overall pick in the fourth round. On March 25, 2018, the team signed him to an entry-level professional contract. Later, Borgen was assigned to join the Sabres' AHL affiliate. So, on March 26, 2019, Borgen made his NHL debut against the Ottawa Senators. Will Borgen in one of his professional games.  SOURCE: Instagram @willborgen

After playing with the Sabres for some seasons, Will was selected from the Sabres by the Seattle Kraken in the 2021 NHL Expansion Draft on July 21, 2021. Since then, Borgen has been a prominent player on the Kraken team.

Besides that, Borgen is also a national player who plays for the national team of the United States. He was first selected to represent America at the 2016 World Junior Championships. He recorded 3 assists in 7 games in the tournament, and the US team won the bronze medal. In the same way, Borgen was selected to play for his nation at the 2018 Winter Olympics. Bryan Rust is another ice hockey player associated with the national team.

Born on December 19, 1996, William Borgen grew up in Moorhead, Minnesota, U.S. Borgen was raised by his parents, Bill and Lori Borgen. Will has received huge support from his parents. Bill and Lori play a huge role in Will's career achievements.

When Borgen made his NHL debut, his parents were given a stipend. Furthermore, Borgen also has two siblings, both brothers named Dylan and Tyler. Will is the youngest of three kids. Will loves spending time with them, hunting, and playing video games during his spare time.

Here are Details on Will Borgen's Injury

Will Borgen has been professionally playing since 2018 and has helped his team win some games. Likewise, he has been a victim of injuries that led him out of major tournaments. In late February 2021, he suffered a forearm fracture which left him out for two months.

Borgen returned to the action in April and again in May of the same year; Borgen was out of a game due to a minor undisclosed injury. After coming to Kraken, he picked up a lower-body injury in December 2021.

Borgen Wears Jersey No 3 – His Height and Weight

The ice hockey defenceman wears jersey number 3 in his team. He shoots with his right. Regarding his physical appearance, Borgen is a tall guy standing at the amazing height of 6 feet 2 inches (188 cm). Besides, Will weighs 85 kg (187 lbs).

Borgen is quite active on social media. We can find his verified accounts on Instagram and Twitter. His IG username is @willborgen, and more than 6k people have followed him there.

Similarly, Borgen has been using Twitter since August 2011 and has accumulated more than 3k followers. Borgen mainly shares updates regarding his professional life from these social media accounts.