William Ross Bednar, better known as Will Bednar is an American professional baseball pitcher who is signed to the San Francisco Giants organization. He finished his collegiate baseball career playing for the Mississippi State Bulldogs. Pittsburgh, Pennsylvania native,

Will Bednar was born on 13th June 2000 under the star sign Gemini. The twenty-one years old stands 6'2” tall and weigh 230 pounds. He is the younger brother of David Bednar, also an MLB player who is signed to the Pittsburgh Pirates. David was drafted by the San Diego Padres in the 35th round, with the 1,044th overall selection, of the 2016 MLB draft.

Will Bednar who just turned professional this season has pocketed a tremendous signing bonus of $3.4 million through a rookie contract with the San Francisco Giants. His deal is worth $3.6 million, 90% of his pick’s $4,036,800 slot value.

He is currently playing for the San Francisco Giants organization where his salary is yet to disclose. Already earned millions, Bednar's net worth in 2021 is estimated at around $3 million.

Will Bednar is currently in a relationship with Emily Hayward. From prom date to real date, they own it all.

On 8th April 2021, Will gave an IG shout to Emily on the occasion of their three years of togetherness. He wrote, "3 whole years with my favorite person! #3years #buckeye #moose." 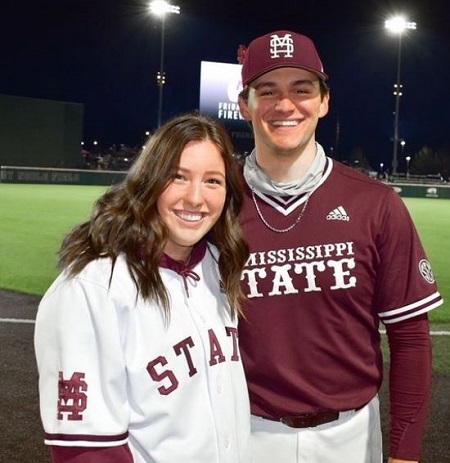 Will Bednar and his girlfriend Emily Hayward SOURCE: Instagram @will_bednar

The couple seems really cute together and their love life is going really smoothly. We wish nothing but luck to this young MLB couple.

High School to College to MLB

Bednar enrolled at Mars Area High School in Mars, Pennsylvania, where he played baseball under his father, Andy.

Though he committed to play college baseball at Ohio State University, he later signed to Mississippi State University. he spent a majority of the sophomore season (2017), catching and pitched only around 15 innings. The following season, he switched to pitching full time and went 8–0 with a 0.64 ERA and 120 strikeouts over 66 innings.

During his senior season, he did not play much due to a shoulder issue. He was not selected in the 2019 Major League Baseball draft, and thus enrolled at Mississippi State.

At the 2021 MLB Draft, he was selected by the San Francisco Giants in the first round with the 14th overall selection.