Being a player from Riga, Latvia, Blueger plays represents Latvia in national and international games. He played with the junior team at the 2011 IIHF World U18 Championships. Teddy was a part of the national team in four World Junior Ice Hockey Championships. His senior debut for the team came at the 2017 IIHF World Championship.

Teddy Blueger Is Married to His Wife, Monique LaFontaine

Blueger is a happily married man who lives blissfully with his wife, Monique LaFontaine. There are few details about their relationship timeline, but NHL reports that Blueger and LaFontaine are college sweethearts. After dating for some years, Teddy and Monique tied the knot on August 6, 2021. Their marriage ceremony was organized in Bay Harbor, Michigan, in the presence of their family and relatives. We can find the video of the couple's first dance shared by Wedding Dance School on Facebook. Since getting married in 2021, they have lived a low-profile life.

Blueger's Net Worth in the Six Figures: More on His Salary and NHL Contract

Blueger is signed with the Pittsburgh Penguins of the NHL. He has a massive deal worth $4,400,000, making his annual salary $2,200,000. Exploring his career earnings, it is believed that, Blueger has a net worth of over $3 million. Ty Smith is another hockey player from the same team with a similar net worth.

Teddy Blueger Jersey and Injury: Here Is His Fight Video With Jeremy Lauzon

Blueger plays as a center, wearing jersey number 53. While playing in many games, Blueger has suffered some injuries that have forced him to miss major matches. In September 2022, he had an upper-body injury.

Besides injuries, Blueger has also made headlines due to his altercations in the middle of the game. In April 2021, Blueger and Boston Bruins defenseman Jeremy Lauzon had some issues. They exchanged blows late in the third period, with the Bruins leading 1-0.

Blueger Before and After NHL Career

The professional player started playing hockey in BHS hockey school. In 2009, he moved to play at Shattuck St. Mary's in Faribault, MN. He played his college hockey at Minnesota State University, Mankato. Furthermore, he was drafted in the 2014 draft. 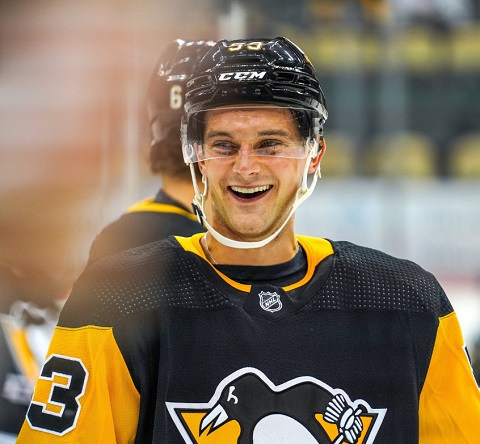 Teddy was born Theodor Blueger on August 15, 1994, in Riga, Latvia. Teddy was raised by his beloved parents, Valentin and Janna Blueger. Teddy has kept their details confidential.

Apart from that, Teddy grew up with his younger brother, Roberts. His brother is also engaged in the same field as Roberts and plays ice hockey.

Teddy's Height in Feet and Weight in Kg

Moving to his physical appearance, Teddy is a tall guy having a height of 6 feet (183 cm). His weight is 84 kg (185 lbs). Teddy has an athletic body which he achieved through years of hard training.