Zhang Shuai is a rising professional tennis player from China. Zhang is a two-time Grand Slam champion in women's doubles and turned professional in 2003. The player plays right-handed, and the coach, Liu Shuo, coaches her. Further, Shuai started playing tennis by joining a local tennis club.

The tennis star Shuai has made a special name in the Chinese tennis world. She was born on January 21, 1989. Further, Shuai grew up in his birthplace, Tianjin, China. The tennis player is the daughter of Zhang Zhiqiang and Wang Fengqin. Coming from a sports background, her parents have supported her through her tennis career. Additionally, she is also known by her English name Rose.

What is Shaui's Salary As A Tennis Player?

Shuai is a professional-level player and enjoys a whopping salary from her growing tennis career. Besides, her prize money as of 2023 is calculated to be $ 9,307,020, so her career fortune, for now, is also estimated to be over $ 9 million. While glancing at her playing career and earnings, Shuai's net worth is more than $ 4 million.

Zhang is a hard-working and skilled player. She has always taken advantage of the opportunity to participate in any events and tournaments. So, in past years she took part in Open BLS de Limoges, where the player grabbed above $ 4,000. Likewise, she bagged above $3,475 in Credit Andorra Open. In 2023, January Shuai bagged home $7,500 by playing in Adelaide International 1 in Australia.

The Chinese tennis player Shuai has made her appearance in various events. She has also participated in many WTA tours, Australian Open, and French Open, from which she has surely made a good fortune that has led her to live a lavish lifestyle.

Is Zhang Earning From Endorsements?

Tennis is the main source of Zhang's income. However, her fans ask many questions if she is also earning from endorsements and brand commercials as the player is not much outspoken about it; however, she has never promoted any brand on her social media handle. 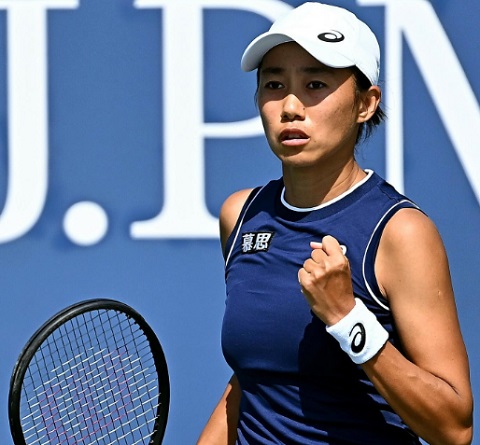 While exploring photos of Zhang on her social media handle, she uses Wilson's rackets, and her apparel is from the sports brand ASICS. Apart from this, Shuai has yet to share brand promotions and partnerships.

Take A Look At Zhang's Lovelife- Is She Single?

Shuai Zhang is shy and has always remained silent about her lovelife. As of yet, Zhangs hasn't dropped any hints about her romantic life, very might know about her relationship status. More, the current relationship status of the player is single, and she has never shared any posts mentioning her loved one on her social media handles. Zhang Shuai with her friends at Unopen SOURCE: Instagram @zhangshuai121

Besides, the information about Zhang's past lovelife is also barred from us. And the tennis player has never been through any controversies or rumors; neither has her name been linked with any guy.

When Zhang Started Her Professional Career?

Zhang always had an interest in pursuing her career in sports and professionally made her debut in tennis in 2-13 through a WTA tour. Following the year, she started the season at the Shenzhen Open. Two years later, in 2016, Shuai started a new season at the Shenzhen Open, where in the first round, she won against fellow wildcard Irina Khromacheva. Zhang Shuai with her friend after a match SOURCE: Instagram @zhangshuai121

Similarly, in 2017 Zhang won her second WTA Tour title at the Guangzhou Open. And she victories the biggest title of her career at the Australian Open in 2019. Last year in 2022, Shuai reached the third round of singles at the Australian Open. The same year, she also amazed her fans by reaching US Open. However, Zhang lost in the second round to Simona Halep at the Canadian Open.

Zhang's parents are also sports addicts, as her father, Zhang Zhiqiang, was a former football player. Her mother, Wang Fengqin, is also a former basketball player). Shuai is not very open about her family life, so she has kept her family details away from media sources.

Shuai once shared that she would open a coffee bar when she retires from her professional career. Unfortunately, nothing much is known about her schooling and childhood career.