A Japanese professional baseball pitcher, as well as outfielder Shohei Ohtani, currently plays for the Los Angeles Angels of Major League Baseball. He previously played for Pacific League side Hokkaido Nippon-Ham Fighters from 2013-2017.

The young talent is well recognized as a designated hitter and occasional outfielder. He is the fastest Japanese pitcher in NPB history, recording at 156 kilometers per hour.

Shohei Ohtani Net Worth in 2019; How much does he Earn as Salary?

Ohtani has an estimated net worth of $2 million, as of 2019, mostly earned through his baseball career.

#ShoheiOhtani #17 of the #LosAngelesAngels reacts to his walk during the fourth inning against the Baltimore Orioles at Angel Stadium on May 3, 2018 in Anaheim, California. #???? #????? #MLB #ShoTime

The previous year he made a minimum salary of around $545,000 per annum along with one-time signing bonus of $2.3 million.

Back in 2017, while he was at Fighters, Ohtani had an annual salary of $2.4 million. Summing up, if he has waited two more years to come to MLB, at 25, he might have netted a guaranteed contract of the bonus of about $200 million for 6 or 7 seasons.

Ohtani also has the potential to earn about $3-$4 million from the bonus in coming seasons.

Currently 24, Ohtani is possibly single and unmarried.  When it comes to his personal life, Ohtani is a private person who prefers not to talk much in front of the media or public. It seems that he might be too busy focusing on his profession at the moment rather than anything else.

Back in high school, Ohtani set some specific goals for him including win the World Series and get married at the age of twenty-six. Hence, if it goes just like his targeted goal, he might get married after three years.

Shohei Ohtani was born on 5th July 1994, in Oshu, Iwate, Japan. His birth sign is Cancer. Talking about his nationality, Ohtani is Japanese and is of East Asian ethnicity. He and his sibling, Ryuta Otani were raised by their parents: father, Toru Otani, and mother, Kayoko Otani in their birthplace.

Ohtani enrolled at Hanamaki Higashi High School, where he began playing baseball. He recorded the fastest pitch at 160 km/h and notably in the “Summer Koshien”, a Japanese national high school baseball championship tournament.

He recorded 16 strikeouts, 5 hits, 5 runs, 8 walks, and 4.35 era in 10 1/3 innings pitched.  Further, after he uttered a wish to move directly to the major league upon his high school graduation he received interest from several teams including Los Angeles Dodgers, Texas Rangers, New York Yankees, and Boston Red Sox.

On 21st October 2012, Ohtani announced that he would directly pursue his career in MLB rather than turn professional in Japan. Nevertheless, he was drafted by Hokkaido Nippon-Ham Fighters, knowing the fact his only interest to play in MLB.

A month later, he announced that he would sign with the Fighters and was assigned the shirt no. 11 which was previously worn by Yu Darvish.

On 29th March 2013, Shohei Ohtani made his professional debut in the Hokkaido Nippon-Ham Fighters’ season-opening game, playing as the right fielder. For the 2013- All-Star Game, he was picked for a Pacific League roster spot. 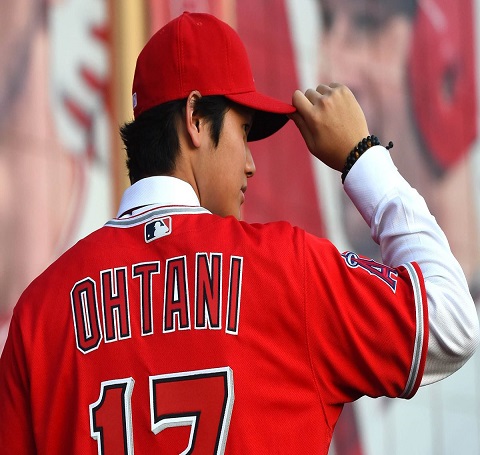 On 8th December 2017, Ohtani signed Major League Baseball side Los Angeles Angels. He has a good bond with his teammates, Mike Trout and Zack Greinke. On 13th December, he was diagnosed with a first-degree UCL sprain in his right elbow.

Shohei was named for the 28-man roster for the Japan National Baseball Team for “2017 World Baseball Classic”, but after his ankle injury, he was forced to withdraw.