Sebastian Korda is a professional tennis player with an ATP singles ranking of world No. 30. Further, he plays right-handed and turned professional in 2018. The Czech tennis coach, Theodor Devoty, coaches Korda. Previously he played under the Czech's professional caches Petr Korda and Dean Goldfine.

Sebastian made the headlines by winning the 2018 Australian Open  Junior title. His career stats are rising as compared to his sister's stats in golf. Korda was an enthusiast from a young age, and he won the golf tournament at 11 but later shifted to tennis.

Sebastian Is The Son Of Petr Korda- His family background Checked

Korda is not just famous for his professional tennis career. Besides, he is known as the son of former world No. 2 Czech tennis player Petr Korda. Not only that, his mother, Regina Rajchrtova, is a former top 30 player. As mentioned, he comes from a sporting family, so Korda's older sisters, Jessica Korda and Nelly Korda are LPGA golf professionals. 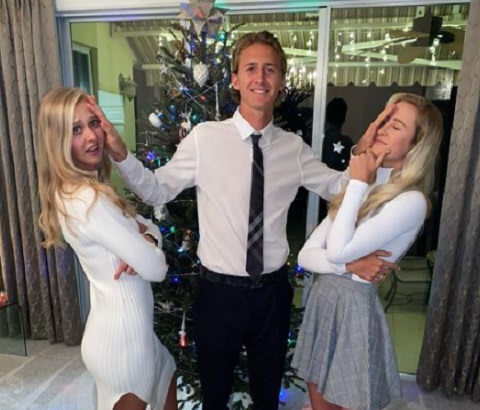 While glancing more at Korda's father's playing career, he bested the 1998 Australian Open and was runner-up at the 1992 French Open. And Petr turned professional in 1987. So, coming up about his mother's tennis career, Regina played for her native country, Czechoslovakia, in the 1988 Summer Olympics in Seoul. Additionally, she reached a career world ranking high of 26 in 1991.

Learn About Korda's Net Worth And Prize Money

The right-handed tennis player Sebastian Korda has been active in the tennis world for many years. Therefore, he must have gained a huge fortune from his professional career, estimated to be millions of dollars. Concerning Korda's playing career, his fortune amount as of 2022 is $2,676,567. While talking about his endorsement deals, like the Croatian tennis player Borna Gojo, Korda is also sponsored by the reputed brand Nike.

The American professional tennis player Sebastian Korda is currently dating his long-term partner, Ivana Nedved. Ivana and Sebastian have been dating each other for over many years. Both come from athletic families, as Ivana's father is a retired Czech footballer and Juventus star, Pavel Nedved. Furthermore, Ivana also had an interest in football, but she worked for Alfa Romeo in the brand and communication management departments. Ivana is a workaholic, and she has played for multiple teams. Besides, Nedved joined CONI as an intern and later worked as an assistant brand manager in marketing and at Conde Nast Italia. According to the latest update, Sebastian's girlfriend works as an editorial intern at Vogue Italia.

Who is Sebastian Korda's Sister? Know About His Age And Personal Details

The tennis player Sebastian Korda was born on July 5, 2000. He grew up with his family in his birthplace, Bradenton, Florida, U.S. His star sign is Cancer and Sebastian is a core follower of Christianity. Sebastian Korda with his father and sister at his young. SOURCE: Instagram @sebastiankorda

While talking about his physical appearance, the tennis player has an impressive height of 6 feet 5 inches which is 1.96 meters

Coming from a sporting family, he began his professional career in 2018. The same year the player made his ATP tour debut at the New York Open. So, he made his comeback in 2020 with his Masters 1000 debut.

Sebastian made his grand slam debut as a wildcard at the US Open, facing Denis Shapovalov and losing the match. Again in 2021, Sebastian was one of the finalists in his first ATP, conquering Cameron Norrie. Likewise, the player made his Australian Open debut in 2022, recording his first debut by winning against 12th seed Cameron Norrie.