Scott Brown is a Scottish professional football who has signed to the Scottish Premiership club Aberdeen as a player-coach role on a two-year contract working as an assistant. Earlier, he played a 14-year tenure with Celtic (2017-2021), winning an unprecedented ten Scottish Premiership trophies. At international he represented Scotland national team (2005-2017).

How Much Is Scott Brown's Net Worth In 2021? (Salary, Market Value, & Endorsement)

Brown is currently under a player-coach role on a two-year contract working as assistant manager to Aberdeen. However, his financial deal with Aberdeen is yet to make public. While at the Celtics he made an annual salary of £1,196,000 since 2014. His annual salary was reported to be $25,000.

Besides, he is endorsed by Adidas. As of 2021, his net worth is approximately $5 million. He reportedly earns more than what he earned at Celtic, serving as a player and assistant coach for Aberdeen.

Scott Brown is married to Lisa Taylor. The couple tied the knot on a sunkissed Mediterranean island in June 2009. Their romantic wedding ceremony took place in Cyprus and was attended by just a handful of relatives and close friends.

Instead of wedding gifts, the couple set up a “wishing well” for guests to drop in donations to Cancer Research in memory of Brown's tragic sister, Fiona, who died in May 2008 after losing her battle with skin cancer- the same disease which killed Hoops legend, Tommy Burns. 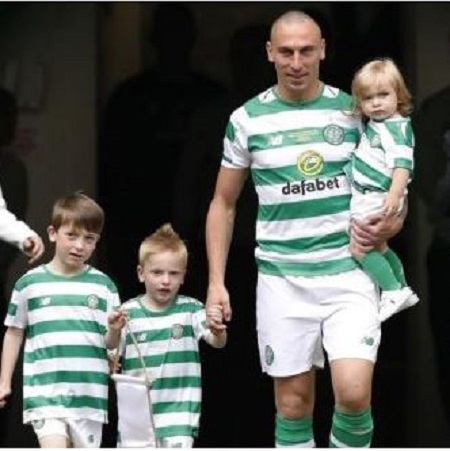 Brown began footballing with Hibernian, breaking into their first team in 2002. There he won the 2006–07 Scottish League Cup. Also that season he won the SFWA Young Player of the Year award.

In May 2007, he signed to Celtic for a transfer fee of £4.4 million which is the highest transfer fee paid between two Scottish clubs.

At Celtic, with the team, he won 10X Scottish championships, 5X Scottish Cups, and 6X Scottish League Cups. Furthermore, he captained (since February 2010) the club to nine consecutive championships and successive trebles from 2016–2020. He made more European appearances for Celtic than any other player and has won the 2X PFA Scotland Players' Player of the Year award as well as the 2017-18 Scottish Footballer of the Year award.

For his country Scotland, Brown played for U-19 and U-21 levels before making his full international debut in November 2005, aged 20. On 5th September 2009, he scored his first goal for the senior team in a 2010 FIFA World Cup qualification victory over Macedonia. After winning his 50th cap, he was inducted into Scotland's Scottish FA International Roll of Honour in March 2016.