Sasa Kalajdzic is an Austrian professional footballer of Serbian descent who plays as a forward for the German team, VfB Stuttgart, and the Austria National team. He was recently included in the Austrian National Team for the Euro Cup 2020 to be held in June 2021.

Kalajdzic was born in Vienna, Austria on July 7, 1997. The six-foot-seven forward started his footballing career for FC Admira Wacker Modling. He initially played as a midfielder but later switched to a striking position.

Kalajdzic's pro career began with SR Donaufeld Wien in 2014. Before he departed from the club in 2016, he played in 18 of Wien’s games whilst scoring seven goals across all competition. He then started to play jointly for the Austrian team, FC Admira Wacker B side, and their main squad.

Throughout the next three seasons, he made combined 66 appearances and scored 24 goals for Admira Wacker I and II. On July 5, 2019, Kalajdzic signed a four-year contract with the Bundesliga team, VfB Stuttgart. He succumbed to an injury in the summer pre-season training camp and was sidelined for a whole year. On May 28, 2020, he made his debut for the team, coming into the game in the 78th minute of the matchday 28 fixture of the season 2019-20 in a match against Hamburger SV.

To date, he has made 39 occurrences with Stuttgart finding the net on 17 incidents. He made his International debut with the Austrian national team on October 14, 2020, in a Nations League game against Romania. The following year, March 25th, he scored his first two international goals in a 2-2 away draw versus Scotland during the 2022 Fifa World Cup Qualification.

Sasa Kalajdzic's Net Worth and Salary

Kalajdzic has raked in close to £1 million in salaries alone, cruising through Admira Wacker, and VfB Stuttgart. His yearly take while playing for the Admira I was reported to be around £11,440. When he moved to the senior team, his salary inflated almost eightfold amounting to about £83,200.

By the time his contract came to an end in 2019, he had already pocketed over £166,000 from his two seasons with the Admira. He was signed by the Swabians with a €1.75 million transfer fee.

His current contract expires after the season 2022-23. Until then, should Stuttgart decide to keep him without a movement, he will have likely grossed £1.7 million exclusively from the yearly paychecks. In that sense, his existing net worth should very well be in the region of half a million pounds or so.

Who is Sasa Kalajdzic's Girlfriend?

For those who were watching out Kalajdzic on and off the pitch through his Instagram, it wasn't until October 2019, that they got the chance to meet his girlfriend, Lorena Grabovac. On the day, the Austrian-born forward introduced a brunette beauty to his fans sharing a picture where he can be spotted posing by the side of Grabovac somewhere in Schlossgarten, Stuttgart. 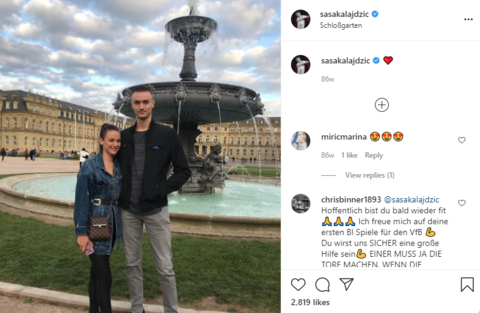 The classic red heart emoji tagged alongside the post made it pretty clear that Sasa had been taken for good and all and hence was no more single.

Stuttgart number nine kept on doing so for several of his afterward Instagram feeds - occasionally taking pictures with his girlfriend in locations such as Killesbergturm tower, Vienna, or even their house.

A month after Kalajdzic changed his relationship status from single to taken, Grabovac introduced the six foot seven forward to her Instagram followers. 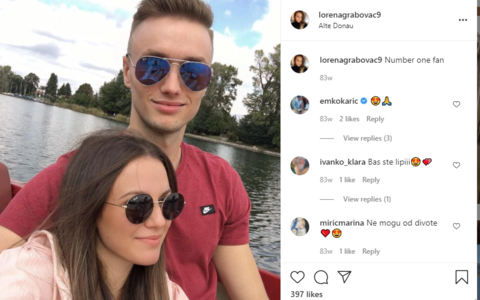 Though she refrained from addressing him as his boyfriend, her caption, "Number one fan" virtually confirmed her love for the Austrian footballer. Her March 10, 2020, Instagram post officially declared that she was indeed in a relationship with Kalajdzic.