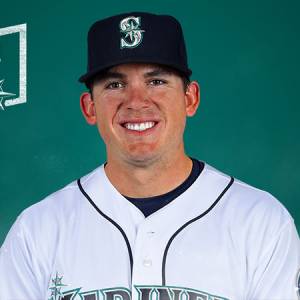 As a First baseman / third baseman, Ryon Healy reportedly earns around $579,800 as his yearly salary from Seattle Mariners. Further, he has an estimated net worth of over $1 million.

As per the reports, he is in a romantic relationship with his girlfriend, Courtney Michael.

Reportedly, he is 19th best-paid player of Seattle Mariners while Edwin Encarnacion is among the highest paid player, having an annual salary of $21,666,668 in 2019.

Being specific, he has an endorsement deal with Waltham Luxury Watches as he regularly promotes the brand in his Instagram account.

Who is Ryon Healy's Girlfriend?

According to the sources, Ryon Healy has a beautiful girlfriend, Courtney Michael. Further, Ryon and his love are dating each other for quite a long time. Also, they call themselves best friends to define their bond with each other.

His girlfriend, Courtney is a fitness freak.

Who knew love could be so fun? #happyvalentinesday

According to Ryon's social accounts, he got engaged to his future wife in August 2018. At first, they revealed their relationship officially on Instagram on March 31, 2016. But, their wedding date hasn't been revealed yet.

Further, they spend quality time with each other. Recently, they went Sedona, Arizona for their day off.

Talking about his body measurement, the famous athlete weighs 102kgs(224 lbs) and his height is about 6 feet and 3 inches.

Ryon Healy was born on January 10, 1992, in West Hills, California to parents Patrick Healy and Laurie Healy. He is American and belongs to the White ethnic group. Further, his star sign is Capricorn.

Healy was in Encino, California, attending Crespi Carmelite High School. Healy, undrafted from high school, enrolled at Oregon University where he played college baseball as the Oregon Ducks ' first baseman. Healy set a single-season record for Ducks as a junior with 56 runs batted in (RBIs) and 118 RBIs for a career record.

In the third round of the 2013 Major League Baseball draft, the Oakland Athletics selected Healy. After Playing in a minor league, Manager Bob Melvin immediately inserted Healy as the third baseman of the team, replacing Danny Valencia.

The Athletics traded Healy for Emilio Pagan and Alexander Campos to the Seattle Mariners on November 15, 2017.