Ryan Dempster is a former Canadian professional baseball player who played for the teams like Florida Marlins, Cincinnati Reds, Chicago Cubs, Texas Rangers, and Boston Red Sox. Additionally, he was first drafted by the Texas Rangers in the 3rd round of the 1995 MLB draft. Moreover, he made his MLB debut on May 23, 1998, for the Florida Marlins and played his last game on September 29, 2013, for the Boston Red Sox.

As of 2019, Ryan has an estimated net worth over $60 million, which is entirely generated from his professional career. Also, he has collected $103,170,000 as entire career earnings, playing 16 seasons in MLB. Besides, he is married to his beautiful wife, Jenny Dempster with whom he shares three adorable children.

Ryan Dempster Earnings; How much is his Net Worth?

Some of Rayn's career contract and earnings are tabulated below:

Apart from playing career earnings, he earned an additional amount of money from different brand endorsement and commercials. However, the details about his earnings from the deals are not in the media yet. With the reference of Ryan's, we are confident that he has a huge fortune and is obvious to be an owner of expensive cars and luxurious house.

Some of his major Career Contract are discussed below:

Is Ryan Dempster Married? Know about his Relationship Status

Talking about Rayn's relationship status, he is a married man, and currently, he is enjoying a blissful marital relationship with his wife, Jenny Dempster. Reportedly, the couple met for the first time when Rayn's wife was working or the Atlanta Thrashers in marketing. 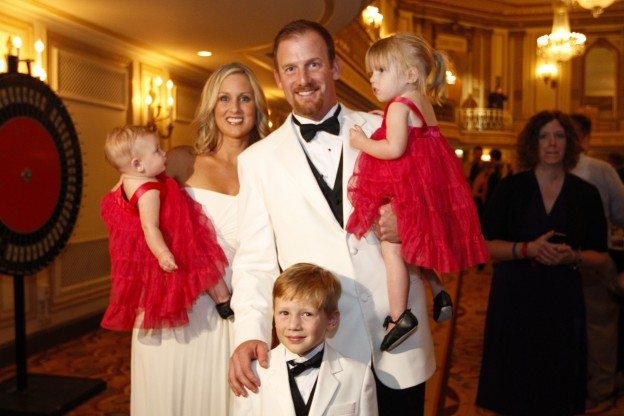 After dating for some time, the couple eventually decided to get married in 2003. Moreover, the lovely duo is a parent of their three children, Bradly Riley, Finley and a daughter who was born around 2009. Their daughter was born with the DiGeorge syndrome, which is a genetic disease. 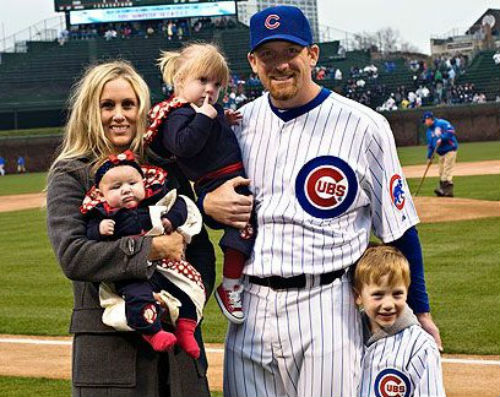 Ryan Dempster with his wife and children SOURCE: fabwags.com

Besides, there is also the news about them getting divorced; however, there aren't any concrete source to claim about the news confidently. Moreover, the couple rarely appears publically in the media, which also suggests that they might be having a conflict in their marital relationship. Well, nothing is concrete yet, and we are left without an option rather than waiting until the news of their divorce gets official.

Ryan was born on May 3, 1977, in Gibsons, British Columbia, Canada, but the details about his parents are not in the media yet. Moreover, as per Ryan's birth, he is an American native and belongs to the ethnic group of white.

Also, Dempster was born under the star sign, Taurus. In his early career, he played for the teams like Hudson Valley Renegades, the Kane County Cougars, and the Charleston RiverDogs.

Ryan is a retired professional baseball player from Canada. In his entire career, he has played for the teams like Florida Marlins, Cincinnati Reds, Chicago Cubs, Texas Rangers, and Boston Red Sox. Additionally, he made his MLB debut on May 23, 1998, for the Florida Marlins and played his last game on September 29, 2013, for the Boston Red Sox.

Some of his notable career achievements include 2× All-Star (2000, 2008), World Series champion (2013) and many more. In 2014, he declared his retirement, giving the reason that he wants to spend more time with his family. In his entire career, he played with some of the famous baseball players such as Dustin Pedroia, Blake Swihart, Jon Lester, Yoenis Céspedes and many more.