Ron Francis is the Seattle Kraken general manager and a former Canadian Ice Hockey Player. Further, he was drafted fourth overall in the 1981 NHL Entry Draft. Ron played over 20 NHL seasons. He is the first ice hockey player inducted into the North Carolina Sports Hall of Fame and also became Hockey Hall of Game in 2007.

Francis is one of the skilled and experienced Ice Hockey players whose playing era is still talked worthy. He was born on March 1, 1963, in Sault Ste. Marie, Ontario, Canada. Besides, he is the second cousin of Mike Liut. The two-time Stanley Cups winner, Francis, is a family man but rarely shares his family details on web sources.

Ron Francis is blissfully married to his wife, Mary Lou Robie. The couple married in 1986. Besides, Mary is a native of Stamford, Connecticut. The couple met for the first time during his tenure with the Whalers. Moreover, he has an interesting marital life, and the couple is regarded as the couple's goal.

Ron and Mary are the parents of three children: Kaitlyn, Michael, and Connor. According to the sources, Kaitlyn was born in 1991, whereas the couple gave birth to Michael in 1993 and Connar in 1996. Francis is a blessed father and husband to have an amazing family. However, he has always remained less expressive about his family life. Therefore, the famous sports figure has talked less about his wife and kids on web sources.

How Rich is Francis? Everything On His Net Worth

Even after the retirement, Ron is active in the hockey world. After exploring his professional career, we can say that the former NHL player has bagged whopping money. As per the sources, Francis's career earning is  $39,402,882.

The rising Ice hockey player Mason McTavish holds a salary worth $3,394,167 and a  net worth of over $5 million.

Ron has a sports physic, and he has yet one of the fit and well physical appearance like the former Ice hockey player Luc Robitaille. He measures his height at 6 ft 3 inches which is 1.91 meters.

More, he weighs 200lbs which is 91 kg. Despite his departure from his playing career, Ron updates his followers about hockey. To keep updated about Francis, we can follow him on Twitter, where he is active under the username @ronfrancis10.

Ron is the winner of two Stanley Cups in 1990–91. He won the following season with the Pittsburgh Penguins. Besides, his best season was 1995–96, when Francis recorded 119 points; that season. Likewise, Ron was also the first player to win the Frank J. Selke Trophy and the Lady Byng Trophy in a single match. Ron Francis and his teammates are holding a trophy.  SOURCE: NHL .com

Ron Francis's birth name is Ronald Michael Francis Jr. Besides, Ron is a private nature person when the topic is about his family life; as of now, he still needs to share his parents' names and family facts on web sources.

Therefore, we need to learn about his private life. Follwoing his birth facts, the former NHL player's zodiac sign is Pisces. Additionally, the information about his academic career has also remained silent.

However, he might be well educated and must have received his education from a reputed university emphasizing his home country.

Ron Francis made his professional career debut as a youth. In 1975 he played Quebec in International Pee-Wee Hockey Tournaments. The Hartford Whalers drafted Ron. He also created a record of consistency and durability by averaging more than a point in a single match in over 1,700 games in 23 seasons. 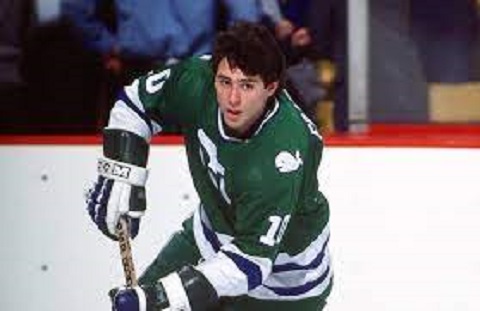 In Whalers, he played for almost ten seasons, and he was exchanged with Ulf Samuelsson and Grant Jennings while joining the Pittsburgh Penguins on March 4, 1991. As a free agent, Francis joined the Carolina Hurricanes for 1998–99. The former Ice Hockey player ended up playing his career with the Toronto Maple Leafs.

After he retired from his playing career, Ron was the director of hockey operations with the Carolina Hurricanes. Later in 2014, he was named general manager of the team 2014. Likewise, on March 7, 2018, Francis was appointed as the president of hockey operations by new Hurricanes' majority owner Thomas Dundon.

After the termination of Francis's contract, he served as the Seattle Kraken's first general manager.