The former Oakland Raiders wide receiver has been associated with several football teams during his active career. Some are Toronto Argonauts, Carolina Panthers, Dallas Cowboys, and Los Angeles Raiders. Before playing professionally, he played football at Wilkes high school and Notre Dame university in his early years.

Rocket Ismail is a family man. He was happily wedded to his beloved wife, Melaine Ismail, in 1994. Melaine is a film producer by profession. They have in a healthy marital life for more than 28 years. Together, the lovebirds are the proud parents of four children. 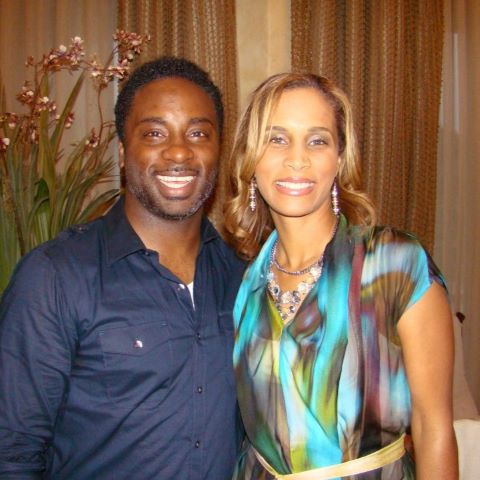 Family time with his wife.
SOURCECEtwitterr

For your concern, Ismail was born under the family name Raghib Ramadan Ismail on November 18, 1969, in Elizabeth, New Jersey, USA. Regardless, the world knows him by the word "Rocket Ismail." Despite being born in New Jersey, he grew up in the Wilkes neighborhood.

Ismail came into this earth as the son of his loving father, Ibrahim Ismail, and mother, Fatma Ismail. Notably, his father Ibrahim died when he was ten years old. He has two siblings brother named Qadry Ismail and Sulaiman Ismail. Qadry is also a former NFL player, mostly known by the nickname "The Missile." Besides their names, Ismail has not opened up more about them to the public.

How Much Did Ismail Earn From His Basketball Career?

1991 Grey Cup MVP is a well-respected and high-income generating player of his era. He contributed to the basketball world for more than a decade. In his entre level in 1993, he marked the two-year contract deal where he netted $1,450,000 per season with Los Angeles Raiders, as per Spotrac.

Despite being an NFL top prospect, he decided to take his talent to CFL signing a contract worth $18.2 Million for four years. With Toronto, While playing for Carolina Panthers, he received annual payments of $850,000 in 1995 and $935,000 in 1996. Rocket's speculative net worth is around $15 Million. Despite having an impressive financial condition. He is lively and keeps life private from the media.

You may read the Biography of Adam Bighill.

The Los Angeles Raiders selected the 1991 NFL-drafted player, but he opted to play in the Canadian League. After playing two seasons in [ the League, he returned NFL player for several teams. He is well-established and won several titles and awards, including the Frank M Gibson Trophy, Grey Cup champion, CFL All-AStar, and Walter Camp Award. More, Ramadan is in the College Football Hall Of Fame. Talking about his NFL stats, the former wide receiver recorded 363 receptions, 5,295 receiving yards, and 30 receiving touchdowns.